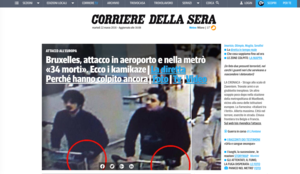 The paywall was introduced alongside a new digital offering and coincided with the legacy media house’s 140th-anniversary celebration. Users still have free access to the homepage and videos, but after reaching the threshold of 20 articles a month,  whether accessing the website via desktop, tablet or smartphone, they are asked to pay a subscription, starting at €9.99 per month (during the first month trial period subscriptions were offered at € 0.99).

They reported that 26,000 subscriptions were taken up during the first month.

Corriere della Sera is the first of the main Italian general news outlets to turn to a paid subscription model.

The new Corriere focuses on the interaction between the print and online product and is designed with mobile platforms in mind.

“With the new Corriere offer we want to take online the in-depth and quality analysis that was once associated only with a print offer,” Stefanelli said.

All content from the print edition will be now available on the website, while more and more in the future the paper will become a summary of the best of what appeared on the web the day before, with journalists to be asked to write for both platforms.

As Stefanelli underlined, probably the biggest change in this reorganisation is the break up of what it once was the online desks into all the section desks. A core team in the online desk remains dedicated to managing the homepage, while the other online journalists have been reallocated to the other sections, with a sort of an evangelising role. A central integrated hub is charged with managing the production of news and is responsible for all content, whether published in print or online.

To adapt to the prominent role now played by the website, journalists shifts have also been changed, with the main shift starting at 7am. The first editorial meeting is held between 8 and 8.30am., attended by the editor or one of the deputies, someone from the central hub and one or two people from each section desk.

Growing emphasis on social and mobile

The new homepage aims to provide a clear and well-organised offer, going towards an ever more personalised structure. Alongside a chronological visualisation, users will also be able to choose between a homepage structure selected by the newsroom and one that reflects personal criteria.

A smartphone app, aimed at a young public, is also in the pipeline.

With 50% of the traffic coming from social and search (the other 50% still goes through the homepage) a growing emphasis will also be placed on social media and an integrated and coordinated approach to all distribution platforms.

Stefanelli said the main source of inspiration for the new Corriere had been the New York Times. “There is a lot of experimentation and good examples to learn from, but everything needs to be tailored to your own needs and reality”, she said.  “In all the changes we made, whether in terms of structure or graphic, we have focused on maintaining our identity”.