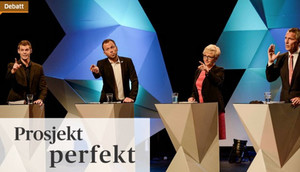 In this excerpt from the report, WAN-IFRA contributing writer Steve Shipside finds out why and how Aftenposten created their new app, how it has been received, and what they still plan to change.

Aftenposten was one of two winners for Best in Tablet Publishing, the other was Axel Springer, which won for EPOS, its immersive multimedia storytelling platform for tablets.

Aftenposten+ gives access to both Aftenposten’s print edition and online edition with the aim of providing a comprehensive and engaging reading experience.

Personalisation options include the ability to select whether editions download automatically for offline reading, with downloads set to take place in the background while using other applications, or while the device is in sleep mode. The app provides access to the content from the newspaper editions the evening before paper subscribers get their delivered as well as integrating constant news updates from Aftenposten.no.

The app suggests “recommended” reading articles (about 10) to help users discover content, particularly long format, an implementation based on reader research prior to launch. As well as the content from the daily edition of Aftenposten the app also gives access to those all-important extra content items such as obituaries, crosswords, sudoku, and the full newspaper archive.

Even Teimansen, Editorial Product Manager at Aftenposten Mobil and the project leader for the new Aftenposten+ app is cheerfully candid about the team’s goals when they embarked on the project. “Oh yes, we had a lot of goals, but the number one was that it should be better than the previous version – and that goal I think we can say we have achieved.”

The target to beat in this case was a previous generation app which was essentially epaper. “The background to the project was that we already had an app for iPad called Aftenposten, which had been on the market for two years and was basically the paper edition but enhanced and made to look better on tablets.”

It wasn’t just the look that needed updating, it was the need to work with a way a more digital-first approach.

“Previously, creating tablet content was labour intensive in terms of production, and the results didn’t look fresh in terms of design,” Teimansen says. “You could read the edition, but it didn’t add a lot to the user experience, so we wanted to enhance that. We did market research to see what the readers wanted and that became the starting point for the new app. The aim was all about making it more than just an iPad app, but also full tablet and mobile.”

While Teimansen was unhappy with the old look and feel, that wasn’t the principle concern that emerged from the research.

“Much of the feedback from readers was about functionality and so the concept we came up with was making everything from the paper editions and online available in one application for a premium user experience that was very different from epaper,” says Even Teimansen.

Developing the app called for both external expertise and a large degree of internal buy-in with as many different departments being involved in the process as possible.

“Some aspects of the development were a real pleasure, and some were really hard, although an external technology partner helped us create the app,” Teimansen says. “Since we meant it to be as easy as possible for the journalists, we wanted to use the same CMS and platform that we do for the online edition, and that brought challenges all by itself ensuring that nothing got lost in the translation to the app. We were helped by a developing team from Schibsted technical who were very committed to the project and did a lot of work but we ensured involvement from a lot of working groups from journalists, to developers, to senior editors and management.”

Asked what he’s most pleased about with the app (aside from its tendency to win awards), Teimansen explains: “I think there are two things. For me, the best thing is the content, but of course, that content is available in other formats so what makes the app has to be a combination of that and the user experience which seems to be appreciated both by the readers and internally within the company.”

“The end result is the premium experience we were looking for, and it is stylish to navigate around, so I think we can say it manages a nice balance of content and look and feel,” Teimansen says.

Reader response has obviously been a key criteria for a project that started with user group research. While Teimansen is convinced of the superiority of the new app, he is realistic enough to concede that migrating an existing user base is still an ongoing task involving a blend of education and seduction.

‘A big departure from the epaper approach’

“When it comes to the goals for user numbers, we still have some work to do, and it will take time to get everyone away from epaper,” Teimansen says. “Some readers are hard to turn around. This is partly to do with the age of our readers and their habits, but the new app represents a big departure from the epaper approach and one that is clearly better.”

“We’re also still working on functionality and there are things we haven’t yet implemented so we are hoping that the ongoing evolution of the app will be a tool that helps win an ever larger audience,” he adds.

“What I can say is that we have tripled the number of daily and weekly users and sessions in our new app, Aftenposten+, compared to our previous app (which was named Aftenposten for iPad). It’s been very enjoyable for us, and we have got a lot of feedback from readers who have moved on from the previous app. They are thrilled. So while there will always be things we can work on to improve I have to say the whole process has been a pleasure.”

Join 300 newsrooms and make a case for your journalism