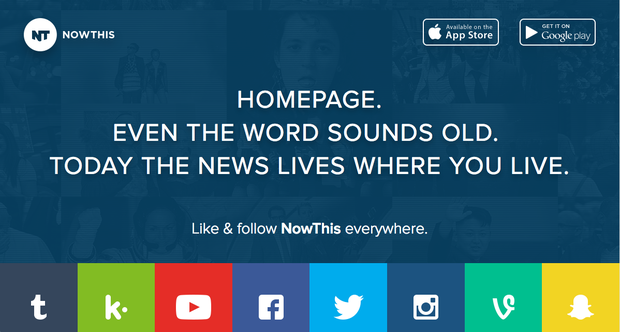 Speaking at the news:rewired conference in London on Wednesday, Patel explained that the company’s key indicators of performance are views and viewership. “By reducing the friction and having the user able to consume videos directly, as opposed to having to click-through to the site, we started seeing more viewership.”

Abandoning a traditional homepage, NowThis adopted a strategy in which all content is distributed: Social used to be the starting point. Now it is the end point for consumption.

With this in mind, the three-year-old company focused on creating platform-specific content, that is visually native to each platform, taking into consideration the context in which the viewer uses that platform. “We don’t try to take one story and put it across different channels, we really build content for the end user on that platform,” Patel said, explaining that data -specific to each platform- is analyzed to create best practices.

Understand your platforms, as well as your audience
Instead of looking at the best-performing stories, NowThis concentrates efforts on improving those stories don’t do well: “It’s about raising the floor, rather than replicating the top,” Patel said.

He also told the World Editors Forum that the company is very closely connected to the main platforms, like Facebook, Twitter, Youtube and has a good relationship with Google. They all have dedicated partner managers that show publishers new tools, give them tips, tricks and best practices. 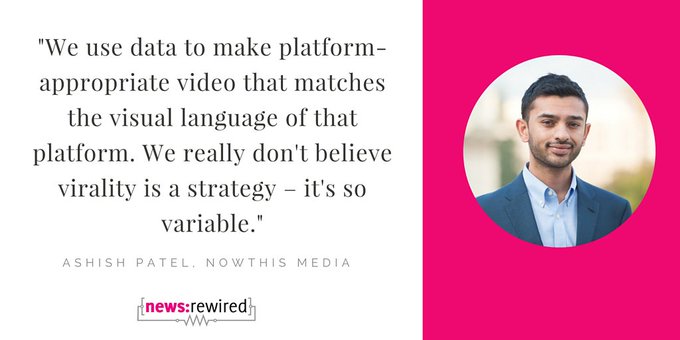 NowThis’ findings on selective platforms:
Facebook: More than 70% viewership is on mobile, about 80% of that is auto-play. The first five seconds is crucial to make the user stop and watch. Emotion is key. Audio is additive, enabling users to consume content without their headphones.

Snapchat: Serves their youngest audience. It’s not an easy product, as it’s not built for publishers. Stories expire, so content needs to be very timely. It’s hard to grow audience and there aren’t many viral features. Focus on live stories, rather than highly visual -laborious- style that NowThis uses, Patel advises.

Instagram: The audience is a little older than that of Snapchat. It’s a visual platform for amazing, inspiring content. Not so much for hard news stories. Patel recommends use of its features, like the 15-second loop, to your advantage.

Vine: It’s all about jokes, tricks, and stunts.

Twitter: Their oldest audience. NowThis posts 90% video, and also includes GIF’s. Speed is the key: being the first to an event. It’s also a great platform for live events like the Oscars and political debates.

The big question: How to monetize distributed content?
The distributed media company has developed NowThis Studios, a department that creates native advertising on behalf of brands, which is distributed over their own brand channels, as well as the NowThis channels. Patel says they will see success with this as it is “fairly scalable”.

“Down the line we’re looking for different monetization products, such as our technology, or our production process,” Patel told us, explaining they’re currently developing an internal platform called “switchboard”, which aims to build an intelligent video management system that can handle the insights process in an automated fashion.