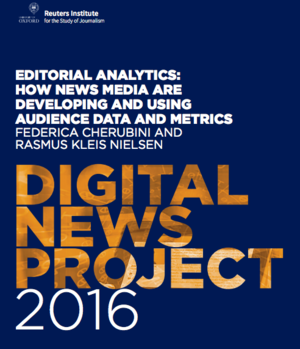 A study by the Reuters Institute for the Study of Journalism, based on over 30 interviews with senior executives working in the field, looks at how newsrooms across Europe and North America are using and developing analytics in their newsrooms and highlights best practices of the most sophisticated audience strategies.

There is no shortage today of off-the-shelf tools to track audience behaviour, often represented by big monitors with real-time traffic data spread around the newsrooms. But many news organisations do not go beyond rudimentary or generic approaches focused mainly on short-term, day-to-day goals. What sets aside best practice examples – what we call “editorial analytics” – is a strategy that is tailored to a specific outlet’s particular editorial priorities and organisational imperatives. (What is your organisation trying to achieve editorially, who is your audience, is your business model based on subscriptions, advertising, non-profit?)

Broadly speaking, a small number of English-language publications in the US and in the UK pave the way, but some legacy market leaders and new startups across Europe are following closely behind.

As the study found, geography, as well as scale and resources, don’t play a crucial role in defining a sophisticated approach to editorial analytics. It’s more a question of how resources are allocated. Many legacy organisations with large newsrooms use far more primitive analytics than some small start-ups interviewed for the report.

With a few significant exceptions, most continental European newsrooms have adopted analytics in an incremental and bottom-up manner as various online editors pick up new skills in the course of doing their jobs and less as a result of a strategic decision taken at the top of the organisation. A role, let alone a whole team, fully dedicated to audience development, is not common across continental Europe. Audience development is done, but frequently on the side by people with many other responsibilities.

But some European news organisations are developing their own sophisticated approaches to editorial analytics: Die Welt in Germany and ONet in Poland have more in common with market leaders in English-speaking countries than they have with some of their less sophisticated domestic competitors.

Die Welt provides a good example of a clear, strategic attempt at equipping journalists in the newsroom with tools that are in line with the organisation’s editorial priorities and which take into account the business model of the organisation.

Die Welt’s article scoreThe Axel Springer-owned title has developed an in-house tool to calculate an “article score” for all articles published. The score represents the performance of each article. It goes from 0 to 30 points and the total comprises five elements: page impressions, time spent on the article, video views, social shares, and bouncing rate. While the traffic element has a prominent place, accounting for between 0 and 10 points, it’s balanced by the other four elements, which account for between 0 and 5 points each, up to a total of 20, which is two third of the total maximum score (30). The different elements are chosen to reflect Die Welt’s overall priorities, for example, not only high traffic, but also engagement and various forms of multimedia and social use.

Die Welt represents an example of an organisation that sees analytics as a strategic priorities and has tailored them to the needs of the organisation – quality content and a business model based on a metered paywall.

It also shows how good analytics are as much about tools and technology as they are about culture and organisations. As Die Welt’s Managing Editor Kritsanarat Khunkham explained, the article score aims to provide journalists with simple and clear indications of how their articles are performing, while promoting quality content rather than just irresponsible reach.

It also aims to empower journalists by helping them understand how their content performed, where there is room for improvement and what actions can be taken. It ultimately encourages journalists to use metrics and analytics to support their editorial judgement and take data-informed decision.

“Editorial analytics: how news media are developing and using audience data and metrics”, authored by Federica Cherubini and Rasmus Kleis Nielsen, Director of Research at the Reuters Institute, examines analytics at leading organisations, provides a review of current trends – and looks at where others are falling behind.