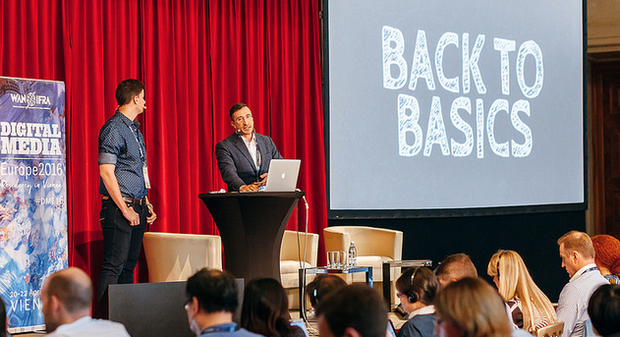 That tweet seemed to indeed capture some of the uncertainty surrounding the media landscape today and many of the dicussions in Vienna, whether it was about digital revenue (reader revs, advertising, mobile, video, etc.), or the distributed content/platform issue, or a solid video strategy, or the myriad issues around digital advertising (ad blocking, native, mobile).

And if you read Joshua Topolsky’s recent post on Medium, “Your media business will not be saved”, it’s easy to just bury your head in the sand and say, “what the hell?”

But if you read between the lines in his post, there is a hint of optimism amid the sobering salvos. And that tweet, and presentation (by Mia Mabanta of Quartz), above also shouldn’t be interpreted as publishers being a bunch of aimless, lost souls who don’t have a clue at the moment.

Indeed, the success stories, the absolute failures and bold experiments shared in Vienna served as inspiration and a good indication that most news organisations are working on all fronts to stay a very serious player in the news race.

My quick takeaway: It’s always interesting to see how The New York Times, The Daily Mail, Schibtsted, BILD – all big brands in different markets and different ways, all on stage – share their strategies to a full room of publishers who probably don’t have the resources and scale to match their might. Yet the diamonds in the rough of this conference were indeed the smaller and regional publishers who, just like those big brands, are leveraging their brands by building bold, low-cost projects that are proving to be successful. Their agile, fail-fast, fail-to-win approach is something even the heavyweights can learn from.

One other: I have known Alexis Johann, managing director of Styria Digital One in Austria, for a few years. Great guy: sharp, passionate about digital, and usually a calming presence. … But when he sat on the panel discussion about Distributed Content to discuss Facebook Instant Articles, Google AMP, etc., this thorny topic tapped into the borderline temperamental side of Alexis. I have never seen Alexis so animated about such a topic. It just reveals the conundrum facing publishers today about where to distribute their content – or not.

Biggest takeaway for me was the uncertainty over future revenue streams: quality video is still mainly a bet, branded content is in early stages, ditto distributed content which is simply brand marketing. The successes of NYT and DMG are hard to replicate. It was the small, low-cost experiments that resonated the most: from diamonds on ‘miss’, to Croation TV cost cutting, to the Tagezeitung 12 app.

DME16 clearly demonstrated to what extent distributed content is at the forefront of most publishers preoccupations. As an intriguing and exciting possibility to grow reach and engagement for individual news stories – but also to some extent as a threat to the coherence and context of the editorial offering a publisher provides. How big a threat is a matter of appreciation and background, however, but there seems to be a consensus that this aspect of media distribution needs to be watched very carefully…

“You don´t have to be rich to be successful. Small companies with brave and bold decisions can move a lot. For example, Russmedia throwing out all national agencies for mobile sales and going their own way with mobile advertising. Same goes with our Croatian guys at 24sata, who admittedly don’t have tons of money, but took the hard lessons of their failures and turned those into big successes with their new video strategy.”


Video is an area were you can burn a lot of money, and we don’t all have the financial strength of MailOnline to launch live TV and a cable offering like Mail TV announced by Kevin Beatty at DME. But as Magnus Zaar said, a video strategy is not optional, “Video will define your editorial product. How do you position your video? You can’t rely on clickbait video. Take it seriously.” To be discovered among the competition you need to offer original, differentiated content. Two interesting cases following this strategy are 24sata in Croatia and Daily Telegraph’s new video strategy in London. In Croatia, after a failed strategy trying to copy linear TV, 24sata focused on using internal talent, tapping into the emotional aspects of “storytelling”, featuring special livestreaming segments, and cooperate with YouTubers (though Chantal Ferrero of Maker Studios says that successful YouTubers are aware of their value and becoming accessible only for big media companies like them, thanks to the Disney ownership), and increase visibility on both Facebook and YouTube. And it’s a success for them. After thorough homework, the Telegraph chose to launch a Telegraph Video channel. It’s going live in May with a mix of in-house production (e.g. video series) and curation of relevant content. They will test advertising formats that are not typical pre-rolls. In Spain, the video studio is also a big part of El País’ new newsroom, said Alberto Barreiro, during his presentation on digital transformation.