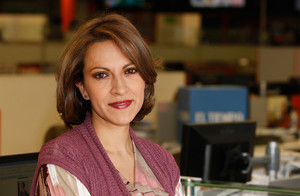 There she was abducted, tortured and sexually assaulted by three paramilitaries. During the attack, one perpetrator told her to “Pay attention. We are sending a message to the press in Colombia”.

Chilling and disturbing. But this is just one strand in Bedoya’s story.

Jineth Bedoya is a speaker at the World News Media Congress in Cartagena, Colombia, 12-14 June

In 2003, while working for El Tiempo, she was kidnapped again. This time by the Revolutionary Armed Forces of Colombia (FARC), who held her for five days.

Since then it has been an incredible story of delayed justice, well tracked by Ifex, during which time Bedoya has become a leading advocate in the fight against impunity and for the rights of women affected by Colombia’s political violence. Her campaign Now is not the time to remain silent (No Es Hora De Callar), tackles the “habitual, extensive and systematic” kidnap and rape of women in Colombia’s internal wars.

Now, as Colombia embarks on a formal peace process with its two main insurgent groups, Bedoya has been nominated as a recipient of the 2016 Nobel Peace Prize. She is nominated alongside Colombia’s president, Juan Manuel Santos, Timoleon “Timochenko” Jimenez, commander of the Revolutionary Armed Forces of Colombia (FARC), and four other victims of the armed conflict which began in 1960.

Bedoya  already has a host of awards.

•    In 2000, she was awarded the CJFE International Press Freedom Award, sponsored by the Canadian Journalists for Free Expression.

•    In 2001, she received the Courage In Journalism Award of the International Women’s Media Foundation.

•    In 2012, she was awarded the International Women of Courage Award.

This year, after 16 years of escaping justice, two of the men who started her on her path of advocacy, were finally sentenced in what she told the Committee to Protect Journalists, was “the first step towards real justice”.

“It is the first in a long road, and it arrives just as the two most important newspapers in Colombia have decided to jointly publish the investigation that was cut off by my kidnapping.”

CPJ says the article by Bedoya, “The Sadness of May the 25” will be published on April 27 in the 2016 edition of its publication Attacks on the Press. It points to her despair and passion for journalism.

“My last 15 years and six months have been a mixture of pain, anger, infinite love for my work, obstinacy and, yes, hopelessness,I still do not know where I found the strength to return to the newsroom, to my notes and to my tape recorder. What I do see clearly is what motivated me. I understand now that my love for this profession and for my work as a reporter was greater than the pain of my body and my soul.”\