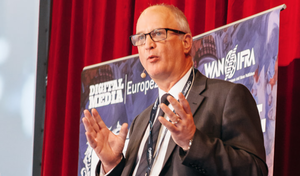 A joint venture with Dr Phil, the new channel will be based around their “dailymail.com” brand and targets a U.S. audience that already reaches 75 million monthly uniques.

It’s not surprising that Beatty prefers to talk about media generally as opposed to “digital media”. As media companies launch into TV, the buzzword is “media hybridization”. There are many distribution channels for different audiences, but as he says, “it’s our voice that sets us apart”.

And when it comes to TV strategy, it’s worth noting, as Beatty pointed out, that 84% of all video is still via linear TV.

Away from TV, Barreiro talked about publishers’ conflicted relationships with social media platforms: “whoever controls the interface controls the business”.

But whatever happens, at El Pais they recognise that in the fight for attention, it’s essential to get your distribution strategy right. Right in the middle of the El Pais newsroom , there is a “distribution hub” where a team works on getting content out onto all platforms.

A big risk is social players “doing things better than us” – players like Google with AMP. They have engineering resources that publishers cannot compete with. As an original partner in the AMP project, however, he noted the obvious advantages for AMP: speed!

Bruno Durdu continued a gentle undercurrent of fear and risk. As Digital Director at the mainly French language Groupe Rossel in Belgium, he worries about Instant Articles being “part of facebook’s quest to absorb the internet”.

On the other hand, if this is the death of the mobile web, then he sees AMP as friend rather than foe.

AMP has been very helpful to them to ensure “user experience within our applications can’t be worse than the one on Facebook applications with our content”. Their recently confirmed funding from Google DNI, for their data-led story ranking project Infotelligence, will no doubt also be helpful.

But back to Barreiro. “I believe a big second wave is coming” he said. He showed the results of a survey that showed 72% of media execs anticipate major disruption in the next 12 months, more than any other industry. Paranoia or sober analysis? Watch this space for the next 3 days!