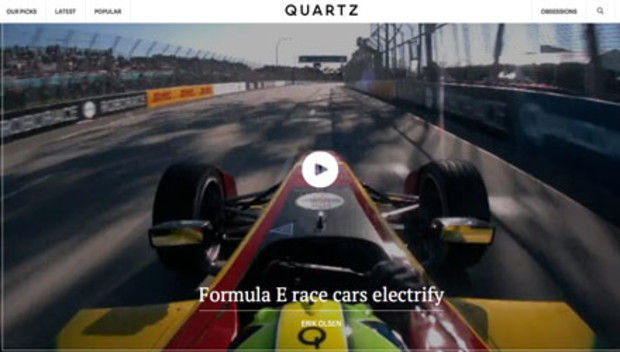 Mia Mabanta, Director of marketing and revenue products for Quartz, will be discussing the company’s strategy at both Digital Media Europe next week in Vienna and World News Media Congress in June.

Quartz launched its new app for iPhone in early February. It features short news items and sends readers to other news sources – all in the conversational style of messaging platforms.

A team of four journalists are banging out dedicated updates for the app and its daily email newsletter, using a new content management system.

And its three-person video team has managed to attract 200 million views in less than a year on a number of platforms.

Growth has been swift, but revenue still remains a challenge.

Seward leads the teams responsible for product development, audience growth, and data visualization, and also writes about the future of TV and other topics.

WAN-IFRA: How many downloads of the new app so far?

It’s still early, but what lessons learned can you share?

Writing for the app is totally different than writing for the website or other platforms. It’s a lot more personal and, ideally, delightful, even when the news is serious. Adam Pasick, who leads the editorial team for the app, has done a great job figuring that out.

What sort of analytics are you gathering/using for engagement? For example, how much click-through to your site (and others) are you seeing vs. in-app reading?

We’re collecting a ton of data, but the metrics that mean most to us are: the number of people receiving notifications, daily active users inside the app, and the number of button taps. Collectively, those speak to real engagement with the app. We are also measuring whether people click through to our website or other links, but we’re not optimizing for that. You should be able to have a great experience entirely within the app, or even just through notifications.

The Quartz appThe beauty of the Quartz daily briefing is that you never have to leave your inbox to get a good view of the biz world… how would you characterise the goal of the news app?

It’s similar. We want to be your worldly, very well read, smart, funny friend. Who also knows all the best GIFs.

How far is this an experiment in delivering bitesize conversational news? Could you create some sort of similar bot for Facebook or Snapchat (for example)?

Yeah, it’s fair to say we are looking at all sorts of platforms, not just our own app. The overall project is to figure out how to do journalism in a way that’s truly native to people’s phones and other devices.

After proclaiming the death of the homepage, is the opposite true on apps?

Well, most people spend most time on their phones inside three or four apps, and it has become more difficult to break into that market. But it also creates new opportunities for new kinds of apps and features, which is what we’re exploring.

App discovery remains a major challenge. How do you drive traffic?

We have a dual strategy: leveraging our existing and passionate fanbase, to make sure they are aware of the app and using it, and finding new readers who may not already be familiar with Quartz through means like the App Store, press, and advertising.

How often do you anticipate iterations of the app, and when do you expect an Android version?

We just released version 1.1 and are working on 1.2 and will keep iterating on it. Android is hard to predict. We’re a small team working on the app and want to make sure we’ve learned enough from feedback to the iPhone version before turning to Android.

How does the sponsorship model work with the app?

MINI is the app’s launch sponsor, and its display ads appear once or twice a day when opening the app. We also serve an inline sponsor message once at the end of a session. The idea was to create ads that would truly be seen and engaged with, but wouldn’t be annoying. And, in fact, people seem to really like the ads are engaging with them at a great rate. After the launch sponsorship, we’re offering the app to other advertisers, and it has already been sold to a few.

What are staffing figures today?

We have about 160 employees worldwide.

Quartz home page featuring splashy native ads.Less than a year ago, you told your staff that your website remains your largest area for growth… Is that still the case?

Yes, in terms of audience size and revenue, qz.com still has a long way to go and will be our largest source of growth for the foreseeable future.

You’ve said that Quartz’s goal is to take a bespoke approach to each platform (apps, site, social, brief, etc.), editorially and commercially. In practice, what has that meant to dedicated editorial resources and organisation… and the same for sales (centralised vs. decentralised)?

It means we have to give each platform its due attention, or we shouldn’t do it at all. For the app, we have a separate team writing for it. They do some other things, too, and are fully part of the rest of the newsroom, but the app is their focus.

How would you characterise the publishing landscape regarding distributed platforms, i.e. what are the risks vs. rewards for traditional publishers debating whether to go all-in on Facebook, for example, or not?

Well, in general, I think it’s foolish to fight readers. If they want to get their news on Facebook, that’s where we’ll go. Of course, our readers are getting news in a wide variety of places, so the challenge is not just to meet them there but also to figure out how to do our journalism best on each platform, learn from each experience, generate revenue, and so on.

What can you share with us about your different revenue streams, assuming native and display ads make up the majority?

That’s correct, advertising is our largest source of revenue. We don’t run any standard ad units. Even our display ads are pretty native.

I noticed over here in Germany that we don’t see much of the splashy ads that US-based users will see, also with sponsored content… I assume those brands don’t want to pay for impressions outside their core markets?

This year, in particular, we are growing very quickly in Europe, particularly the UK, Germany, and France. So I think you will be seeing many more of those great ads very soon!

We’ve already had more than 200 million video views, and our video team hasn’t even been in place for a full year. Most of that viewing is happening on Facebook, with the rest about equally distributed between qz.com, where we’ve built a really nice and super fast video player for the site, and on YouTube. Our video strategy mirrors our approach with everything else, which is that we want to be seen everywhere.

We recently took a group to LA to talk to The Young Turks. As the biggest news channel in the world on YouTube, they are still years from profitability – which was depressing for our publishers! How does the biz model stack up on video for Quartz?

Video doesn’t have its own P&L, that’s not how we think about it. Certainly, we do sell video advertising and generate plenty of revenue from that, but video is also part of a larger, Quartz-wide strategy, and that certainly is working quite well for us.

What’s the makeup of your video team today?

We just hired the seventh member of our video team, and it’ll certainly keep growing.