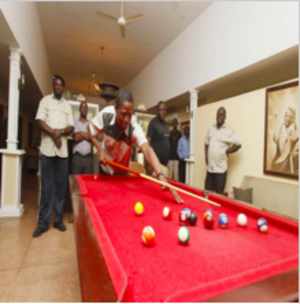 Zambian Post managing editor Joan Chirwa-Ngoma and reporter Mukosha Funga were arrested Tuesday for allegedly defaming Zambia’s President Edgar Lungu in an article published a year ago. They were released on police bond and will appear in court on Monday.

Their arrests are connected to a story published on May 9, 2015 in which an opposition leader, Eric Chanda, said President Edgar Lungu did not have the moral right to advise his aides on drinking beer because the first assignment he undertook after winning elections was to go on holiday to drink, socialize and play pool.

Chirwa-Ngoma, who was added to the charge sheet when she accompanied journalist Funga to the police station last week for an intitial interview, told the World Editors Forum that the whole case was laughable. “It is not a lie that the President drinks, plays pool and socializes. How can such a statement be defamatory? They are using this archaic piece of legislation to infringe on our rights as journalists.”

“We will not allow them to divert the people’s attention to these petty issues when there are many issues in the nation that require the government’s attention.

“This is not the first time that we are facing such kind of harassment; we will not give up but continue to press for more freedom to state things as they are,” said Chirwa-Ngoma.

Zambia is rated “Not Free” on the Freedom House index.