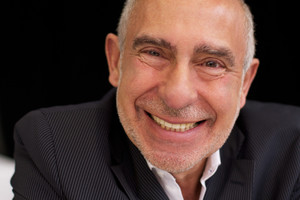 “I always say… let’s do therapy about print,” says García, whose team consults media groups rethinking the role and future of print. His underlying philosophy is that content must be tailored across multiple platforms to fit within the “media quintet”: comprising the smart watch, phone, tablet, online and print.

García Media is working on a new print product for De Telegraaf, and its Editor-in-Chief Paul Jansen, which will launch in The Netherlands this Saturday, 21 May. The renewed lifestyle and weekend supplement will make its debut in an unsteady market, but García says it’s not crazy to launch a new print product now, you just need to give print its proper place in the quintet. Read what he had to say about the closure of print product, The New Day, last week.

In a Question and Answer interview, he explained his views.

Mario Garcia, always a crowd favourite at WAN-IFRA events, will talk about next-level storytelling at the 23rd World Editors Forum in Cartagena, Colombia, on 14 June.

Why launch a print product when circulation is in decline?

A lot of people claim that print is dead, but there is a role for print as part of the media quintet. That the role is not for breaking news, but you can use print for a lot of other things.

De Telegraaf has a very active presence for digital news, but their weekend print product is one of the more popular. A lot of their readers like to sit down and read the newspaper without any interruptions. It’s what many people refer to as the luxury of paper – that you’re not connected. But you can’t romanticize print – if you do that, you will die with print. You have to put print in the context of the new. In that sense, the best printed newspapers will live forever. Having said that, I believe that many of them will not live Monday to Friday – print will be a weekend art.

That is why De Telegraaf and a lot of the clients that I work with are beefing up the weekend product. I think there is a great future for a printed weekend newspaper that is a combination of book, magazine, and documentary film… that takes you in depth into places that you don’t have the time to go to Monday through Friday. They will go online 24/7 with very robust weekend editions on paper, with even more sections than they have now.

What role does original content play in the success of print editions?
I think you have to have some elements of original content in print. What the editor of a weekend newspaper says to the reader is “I know you know about this, but I’m going to tell you more.” At the same time, what can the reader look forward to when their busy week begins?

You have to become essential, and you have to become needed in the lives of these people. At the end of it, we will, ironically, begin to see products similar to those of the 19th century, where you even publish literature or the best writers will float their novels or publish their first chapters in a newspaper.

You still have editors who close their print editions at one o’clock in the morning to get the latest results of sports. Do you think that the people who follow these football games are waiting until tomorrow’s newspaper to find out who won? We can’t have the editor who is jumping for the news. The newspaper has to be a very relaxed, lean-back platform and that will require a new kind of mentality.

How can newspapers and editors adopt this new mentality?
Although I’m known as a designer, what I do these days is a combination of design and therapy. We do workshops where you actually create a situation, like a fire drill, and ask, “If there’s a fire in the building how will I get out?” So it’s the same for news, it breaks and you need to figure out how each platform will be reporting.

When I went to J-school, the rule of the game was “assume that the reader doesn’t know”. Now we tell students that the reader knows more than you do. If you have citizen journalism, how can you expect for print, 16 hours later, to recap this news? You cannot create a newspaper for the people who are not connected. You have to do it for the people that are connected.

There’s a myth that people my age (69) are not connected, but we are. My friends, some who are in their 70s, prefer to read on the iPad because you can make the text bigger. The idea that we are a generation of people waiting for tomorrow’s New York Times to read the story doesn’t exist. Go on the metro, the bus, to the airport. Do you not see people my age with tablets and phones in front of them? Of course you do, but editors don’t see it this way.

Ten years from now, a lot of the editors who are now 55 will retire, and during that period you will have the elephant in the room of legacy. Some editors believe that it is not news until it appears in print, but we are beginning to see that disappear. My clients are very ready to jump, some not happily, but they realize that the train has already left the station.

How should multiplatform approaches be incorporated in the newsroom?
Journalists have to learn how to promote their stories on social media. At my course at Columbia, called Multiplatform Design and Storytelling, I am proud to create editors who think in terms of each platform serving a different purpose, and not one size fits all. In some publications, they write one story and stuff it like a sausage into all platforms.

We all talk about the disappearance of print, but the homepage is probably having an even tougher time. Nobody comes in through the homepage, as a large percentage read articles through social media. It’s like designing the front of your house with an architect, and everyone comes in through the kitchen door, where you did not design or spend any money, and that’s what is happening to newspapers.

It’s time to make the evolution where the homepage isn’t so important. What’s important is how to get them to read the second article. So when I design these web pages now, the article page becomes very important. You need to sell three more articles you want to see now, the five most emailed articles, and advertising. The article page is becoming the homepage, and in that sense, you have 1,000 homepages a day. It’s all turmoil, and change, and evolution.