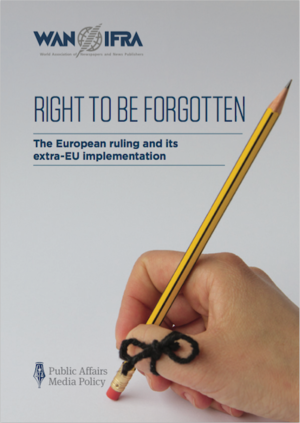 The case was brought against financial newspaper Les Echos by two brothers who objected to the fact that a research in the newspapers’ online archive returned as first result an article published in 2006 that reported on their past troubles with the French version of the US Security and Exchange Commission. The plaintiffs wanted their names expunged from the article, and the piece de-indexed in the newspaper’s search engine.

Right to be forgotten and press freedom

The Court found first of all that the facts reported in the article were true, what made the case a press freedom issue. It was further noted that anonymizing the people involved would have rendered the news irrelevant and uninteresting. The judge also rejected the second request of the plaintiffs, commenting that the accessibility of the article is an essential component of the exercise of freedom of the press.

The Court thus upheld the decision of the appellate judge and concluded that both remedies “exceeded the acceptable restrictions to freedom of the press”, and effectively confirmed the theory that the exception for  journalistic use of data of the Privacy Directive makes the right to be forgotten inapplicable to newspapers.

The case was extremely similar to the one that led the Court of Justice of the European Union to the so called “right to be forgotten” decision in May 2014. Just like in the Costeja and Google Spain case, the plaintiffs Pascal and Stéphane Dokhan reacted to the digitalisation of the newspapers archive, which made the article regarding their case appear prominently in the results of an internet search on the basis of their names.

While Mr Costeja, after repeatedly losing his case against Spanish newspaper La Vanguardia resolved to direct his complaint to Google, the Dokhan brothers decided instead to keep suing Les Echos up until the highest of French courts.

The interest of the decision lies in the fact that for a while now we at the World Association of Newspapers have had conversations with news publishers preoccupied of the possible future developments of the jurisprudence with regard to the Costeja decision. Their concern was that sooner or later also the search engines of newspaper websites might be defined “data controllers” with regard to their online archives, and therefore forced to respect the “right to be forgotten” through the same reasoning that was imposed upon Google Inc. in May 2014. For more details see chapter 1 of the report “decision and legal framework”.

The answer of our report to these concerns was that the Costeja decision did not seem to bear consequences for news outlets. The article summarizing the report explained that “in one of the few clear points of its decision, the Court explicitly said that newspapers are not concerned with link removals on the basis of Right to Be Forgotten, as the existing Privacy Directive, just like the upcoming Regulation, provide for an exception for journalistic use of data. In plain English, this means that if private data that should be erased following the EU legislation are in a news piece, they can stay published”.

After reading the decisions of all the judgement degrees in the Dokhan case, it appears that the simple fact that the requested remedies had an impact on the integrity of a newspaper article was sufficient to lead all the judges concerned to reject the Dokhans’ plea.

In the meantime the face-off continues between Google and the French Data Protection Authority CNIL in the administrative courts.

At the end of March the regulator issued Google with a 100,000 € fine sanctioning its practice of limiting the removal of links in the case of successful right to be forgotten claims to its European domains.

On Thursday Google officially responded with an article in French newspaper Le Monde, cross-published on their European blog. In the piece Google’s global general counsel Kent Walker bluntly says that while “For hundreds of years, it has been an accepted rule of law that one country should not have the right to impose its rules on the citizens of other countries (…..) the French data protection regulator (the CNIL) ordered that its interpretation of French law protecting the right to be forgotten should apply not just in France, but in every country in the world”.
The article draws a parallel between this fact and striking examples of information that is considered illegal in some parts of the world but perfectly legal elsewhere. It concludes announcing Google’s appeal of the CNIL’s order, described as an act in defense of the “foundational principle of international law” that is territoriality.