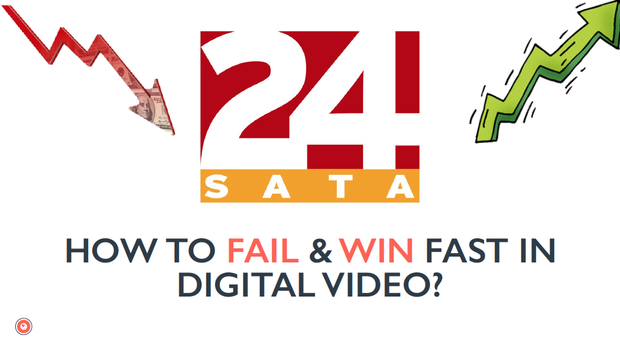 NOTE: Lončarić will also speak at the International Newsroom Summit, 21-23 November in London. Register for the event today!

Not only did 24sata become Croatia’s biggest daily newspaper a mere two years after its launch in 2005, it also built a successful online news portal with a broad range of special interest sites. Encouraged by this success, 24sata started the country’s first news television in 2009 with an equally ambitious goal – becoming Croatia’s CNN.

Investing in high-quality equipment and hiring celebrity news anchors, it seemed as if the TV channel were well on its way to success.

“At first, it really looked like a cool thing and everybody was congratulating us,” Trupčević said. “But then at some point, we realised we screwed it up, that it was bad timing and that we failed in making it widely popular.”

While 24sata was somewhat of a pioneer in the TV news market, it wasn’t long before the competition followed. State TV launched a 24/7 news channel making use of its government resources, Al-Jazeera and a CNN affiliate started covering Croatian issues, and local TV channels offered more news programming, resulting in a much more crowded market.

On top of that, the launch of 24sata’s channel was badly timed with the economic crisis taking its toll on the advertising market.

Having experienced enough setbacks, 24sata moved away from TV and returned to the basics – online video. The designated department had been around for a decade and with 24sata’s strong position in the online market, a following of nearly 1.5 million people across their Facebook pages, the new strategy paid off a lot more quickly.

The online video channel launched with a video series sharing the life and struggles of different people, with examples ranging from a Croatian boy living as a drag queen to a student working as a naked model in his free time.

Additionally, users were encouraged to supply their own content, with some of their videos garnering millions of views on YouTube, coming mostly from outside of Croatia.

24sata also shook up its news coverage, publishing two-minute news segments on Facebook, the web and YouTube, which, according to Lončarić “are catchy and have a twist.”

The format proved highly successful, attracting 4.3 million views in the first month. Currently, the videos are viewed up to 500,000 times per day with an average viewing time of 1.43 minutes.

While the videos aren’t profitable yet, they don’t incur any extra costs as they are produced and edited by in-house journalists with assistance from the video department.

“The revenge was really sweet,” Trupčević said, referring to the success of the new format. “Having up to 500,000 views per day is, on many days, more than the biggest TV broadcaster’s viewership. We’ve managed in a really, really short time to beat TV news with online news.”

To further broaden its audience, 24sata teamed up with Croatia’s most popular YouTubers, which have a celebrity status among teens and tweens akin to that of the world’s most famous actors and singers. With these new partners on board, 24sata launched the YouTube channel JoomBoos, which now has more than 36,000 subscribers.

Its content, a mix of food, beauty, prank and comedy videos, is created entirely by YouTubers. What’s more, the channel has been profitable since the start, generating revenue through Google AdSense and product placement.