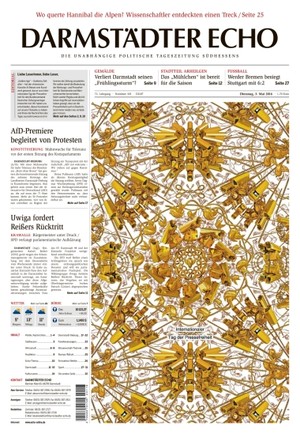 Proclaimed by the UN General Assembly in 1993, following a recommendation adopted at UNESCO’s General Conference in 1991, the annual event on May 3 celebrates the fundamental principles of press freedom. The message of the day is that every journalist all over the world must have the right to report freely and without fear.

The artwork was made available to all 280 members of the Federation of German Newspaper Publishers (BDZV), the leading organization of newspaper publishers in Germany. Newspapers who featured on their front page include the Aachener Zeitung/Aachener Nachrichten, Braunschweiger Zeitung, Darmstädter Echo, Frankfurter Rundschau, Gießener Zeitung, Mainzer Allgemeine, Ruhr Nachrichten, Schweriner Volkszeitung, Wiesbadener Tagblatt and the Wetzlarer Zeitung.

The German initiative is supported by the Berlin University of the Arts (UDK), at which Ai Weiwei currently holds a three-year visiting professorship. One of the most renowned contemporary artists in China, Ai Weiwei openly criticized the Chinese Government on their stance on democracy and human rights and in 2011 was detained for 81 days for „tax evasion” but without any official charges. After his travel ban ended in August last year, he went to Germany where his family lived and he opened his new studio. Here he has also many supporters who admire his political and highly aesthetic conceptual art.

The wallpaper motifs indicate the power of individual freedom and freedom of the internet. Elements included in the patterns are handcuffs, surveillance cameras, twitter birds and steel rebars which all are related to Ai Weiwei’s works and his struggles on the internet – they are a celebration of the information age.

Image: Ai Weiwei “Say all you know and say it without reserve“

Although he said to focus on art rather than politics, Ai Weiwei has been heavily involved in documenting refugees over the last months, announcing the release of a documentary on the issue next year. He also started a project about freedom of expression last year when LEGO refused his bulk ordering because it “did not endorse the use of its products in conjunction with works that had a political agenda”.

“I’ve never planned any part of my career – except being an artist. And I was pushed into that corner because I thought being an artist was the only way to have a little freedom.” Ai Weiwei in Weiwei-isms.

There are growing concerns about the increasing attacks on journalists in Germany. These may be linked to the vulnerable position of journalists covering Pegida protests, says scientist Martin Hoffmann (ECPMF, Leipzig) in an interview with BDZV. The artwork will be a widely visible symbol for press freedom according to BDZV president Helmut Heinen. “Germany is one of few countries where the right to freedom of speech is not only enshrined in Basic Law but is part of everyday life, but this country must defend these important fundamental rights again and again.