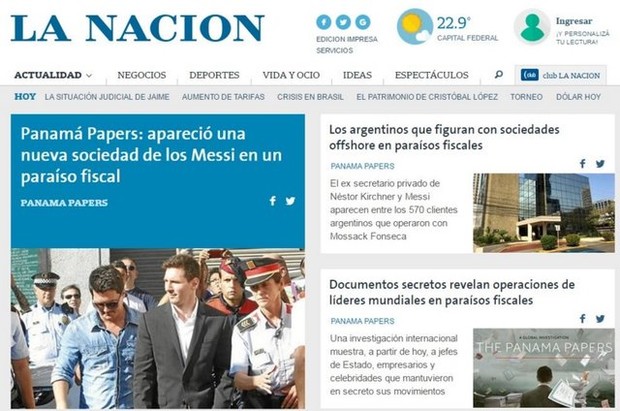 What role did your data journalism team have in exposing the Panama Papers?
Our data journalism team was one of the keys to the success of our coverage. Members of that team were involved from day one. Our technology and data scientist traveled to Washington, DC, for the project’s first meeting, working alongside our journalists, developing our own database and helping ICIJ’s central team to develop theirs. Thanks to the know-how they have gathered and structured since 2011 from corruption and judicial cases, we were able to cross and filter thousands of names from more than 11,5-million documents. The queries were automated so that the journalists received a database that was already filtered. There were many false positives, but the job was made much easier, in this case by technology and, of course, teamwork. The final list of findings was divided between the team of four journalists leading the investigation.

Carlos Guyot will be sharing tips on recreating newsrooms to allow for innovation at WAN-IFRA’s 23rd World Editors Forum in Cartagena, Colombia on 12 Jun 2016 to 14 Jun 2016.

The data journalism team started out with only ten journalists and programmers. How has it developed since 2011?
Our data team started as a combination of skills. We have only one backend developer, one that works in the front end and one data analyst. The size of the data team has varied throughout the years. There are only six full-time members, dedicated entirely to La Nación Data. They work by project with the visualisation team and close to 15 journalists in the newsroom, and this is expanding every day. The team also works in collaboration with NGO’s, universities and the general audience to collect and open data useful for journalism and citizens. It is available in PDF formats or even scanned from print copies.

How hard is it to access data in Argentina? How much, and what kind of training do you offer your journalists?
The most interesting information for our data projects was not published in open data format. We had to scrape it or open it with a crowdsourcing online platform we built or had to manually enter it from hand written PDFs. We also had to scan print copies received as replies from the Government when requesting public information through a National Decree. We offer different types of training.

The FOIA legislation in Argentina is still pending. What do you expect in terms of its development, and how will this affect your operations?
If FOIA legislation is approved, including the open data format feature within its regulation, it will help to open crucial information without having to wait for an open data portal strategy decision to include that information. It will be a way of prioritising government on key information needed by civilians or journalists. For us, it will mean shifting our efforts from building datasets from scratch. It will allow us to focus on analysing data and extracting stories and building applications so that our readers can find many more stories in this data.

Do you have an example of a (recent) data journalism project that had a significant value for society?
One of our projects during last year’s elections was aimed at geolocalising every polling station with a combination of machine learning and manual work to get a national map with results from each school and polling station throughout Argentina. Thus, monitors, authorities, and citizens could check the results in granular information.

To do this, we teamed up with three NGOs who work with transparency projects and four journalism universities, so as to digitise and classify more than 20,000 telegrams and pdfs from the primary elections, that were suspected of fraud in some locations and provinces. We uploaded more than 70,000 PDFs from 14 of the main provinces in Argentina to our collaborative platform “Vozdata”. Besides working online we organised four civic marathons in La Nación with these volunteers, so we were able to conclude the work in time for the general elections.

After analysing the database obtained by typing hand-written files, we discovered that 48% of them had inconsistencies (which ranged from minor differences to unacceptable mendings or situations that could amount to fraud). We reported on that, and during a press conference the National Electoral Director (a member of the government), acknowledged our findings. This lead to a modification of the voting forms for the general elections so as to avoid repeating those mistakes.

What place does data journalism have in your newsroom today?
Our project for data journalism is a constant source of satisfaction and surprises. Throughout the years, it has grown in depth and developed new skills, and now it is expanding horizontally, so its impact is becoming more visible and relevant. Talented journalists (in the broadest sense of the word) are still at the core of our operation. But we know we can expand the reach of our journalism by reinforcing it with a greater understanding of our audience through metrics and technology that help us to get new stories, and to tell them in new engaging ways.