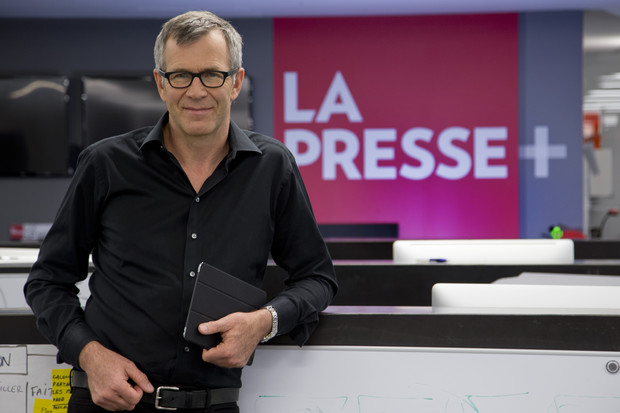 La Presse+, which is now just over three years old, was developed over a two-year period at a cost of CAN$ 40 million. The result was a tablet edition unlike any other, and one that has continually sought to make the most of the tablet platform. It has routinely been cited by industry experts, such as Mario García, as one of the best tablet editions in the world.

Guy Crevier will take part in a session during our World News Media Congress in Cartagena titled “Transforming for the Future (Part 2: Success Stories),” which takes place on Monday, 13 June at 11:15.

In this interview, Guy Crevier (pictured) talks about how things have developed since January, where La Presse+’s numbers are today as well as his ongoing goals for it.

How have things been since you stopped your weekday print edition in January in favour of La Presse+? What has the change meant for newsroom workflows?

La Presse+ readers continue to show exceptional engagement and great enthusiasm for the news experience offered: on average, they spend between 40 minutes on weekdays, 60 minutes on Saturdays and 50 minutes on Sundays with their digital edition. La Presse+ also reaches a younger demographic than paper edition (63% of the La Presse+ audience consists of adults aged 25 to 54, compared to 46% for the print version).

The newsroom workflow changed when we launched La Presse+ three years ago. In order to provide our readers with a truly engaging experience, all reporting staff was asked to consider La Presse+ as their first priority in terms of storytelling, including design, multimedia and interactivity.

What have the reactions been like from your readers and advertisers to this move to mainly digital?

The reactions were very positive, probably because our transition to digital was not a surprise. When we launched La Presse+, we were totally transparent with our readers and advertisers and informed them from the start that our plan was to eventually replace our print edition with our tablet edition.

Our success also confirms that a black and white print newspaper does not correspond to readers’ news habits anymore. Ad revenues from our digital platforms (tablet, mobile and desktop) already account for more than 82% of La Presse’s total advertising revenues.

How many daily readers do you have now for La Presse+?

With an average of 260,000 unique tablets connecting to La Presse+ every weekday, La Presse+ circulation exceeds our most recent record weekly print circulation of 207,769 in 2009 and surpasses our goal of 240,000 daily unique tablet opens for 2016.

Last year, you worked with the Toronto Star on developing their Star Touch edition. Are you working with any other publishers on similar editions?

The La Presse+ publishing platform is available to other publishers. Last year, we’ve created Nuglif, a subsidiary of La Presse overseeing the sales and implementation of our platform. We are currently having discussions with other media groups and publishers.

What are your goals for La Presse+ for this year?

We want La Presse+ to continue to grow in terms of readership, circulation and advertising revenue. We also want Nuglif to develop new tablet editions for other publishers and media groups.