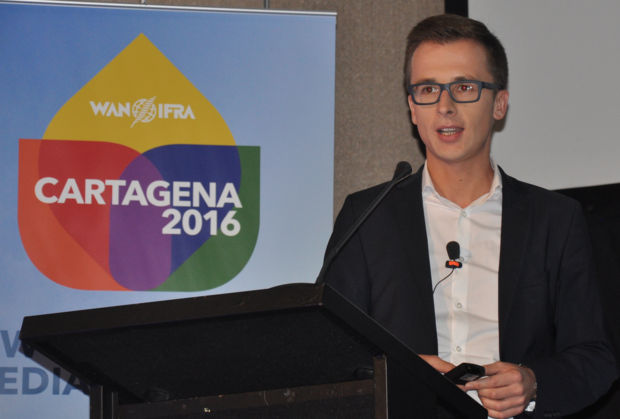 To respond to this trend, Axel Springer created Upday, a free-of-charge app for Samsung smartphones, which provides users with two kinds of content: “Need to Know” information, selected by editorial teams, and “Want to Know” information, which uses an algorithm-based service tailored to the interests of individual users.

“I think this combination of journalism and technology is our biggest USP,” Wodziński said.

One hundred percent owned by Axel Springer, and part of a cooperation with Samsung, which began last year, Upday is currently available in four countries (Germany, Poland, France and the UK) and already has well over 1 million users with a goal of 10 million by the end of 2016, said Wodziński, Upday’s editor-in-chief for Poland.

After a beta phase in Germany and Poland last September, which used a slightly different logo and user experience, Upday officially launched in late February.

Today, Wodziński said, more than 80 people are working for Upday in Paris, London, Warsaw and Germany, where Axel Springer is based.

“We have more or less six or seven editors in each country who are searching the web and selecting the stories for the section we call ‘Top News,’ and they write bullet point summaries of the articles and link to the external sources, which are publishing houses websites or bloggers and so on,” he said.

The second section is called “My News,” which Wodziński said is based on a user’s preferences and selected by an algorithm “a very clever machine-learning system, which analyzes what you click, how much time you spend per article, and on which section,” he said. Users are also asked to select their news preferences (Politics, Sports, etc) when they subscribe to the app.

A platform for publishers

“I strongly believe that publishers and platforms don’t have to fight each other. They can work together to deliver great products to people,” Wodziński said. “That’s why we call Upday a platform for publishers – it’s very easy to join us. So far, we have 2,000 sources in four countries, and it’s a list that is constantly growing. We are approached by big publishing companies and bloggers who would like to join us because at the end we bring them more traffic.”

“All the sources we have are mobile friendly,” he added. “At the beginning, we focussed on growing our reach. We’re really proud to have more than 1 million users and we are glad to see that users are using Upday quite heavily,”  Wodziński said.

“We don’t earn money with it yet, but we know we have to monetize Upday,” he said. “The plan is that we will provide people with non-obtrusive advertising, only full-screen advertising, after a fixed number of articles. We are not going to use banners.”

More importantly, because of the personalized nature of Upday, Wodziński said they’ll be able to target ads to very specific groups. For example, if they know certain readers like to read about cars, they can target automotive advertising to them.

“And what is very important for us as a part of Axel Springer, ad blockers will be forbidden,” Wodziński said.

Next steps for Upday

Going forward, he said they aim to have 10 million Samsung devices installed with Upday by the end of this year. They are also preparing to launch a tablet edition as well as considering venturing into other countries.