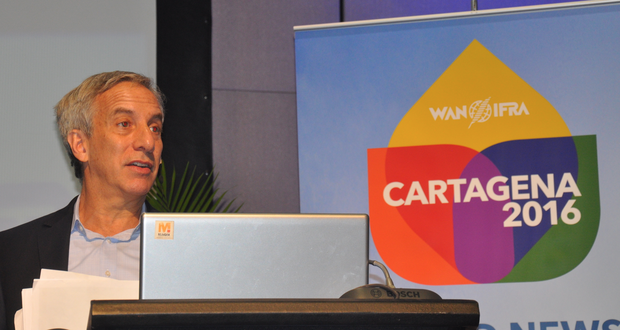 STAT Executive Editor Rick Berke told the World News Media Congress in Cartagena that if the health and life sciences site “can tap into [paid content], it will definitely give us more sustainability.”

Berke said, “Sponsored content has been the most effective revenue source so far. We have over 30 advertisers and sponsors. We want to stick with this amount for now, to not crowd our site and content,” with commercial messages.

Explaining the site’s founding, Berke said, “John Henry, owner of The Boston Globe and the Boston Red Sox [baseball team], felt we had a unique opportunity within the Boston area, which is in an epicentre of health and medicine research and activities. And he felt it gave us an opportunity to untap our ambitious journalism.

“The Globe gave us instant credibility with its Pulitzer-prize winning history, most recently with what you know as the Spotlight coverage,” he continued. (The Globe’s Spotlight investigative reporting team was the subject of an Academy Award-winning film.)

Berke said, “As an independent startup and separate company, [STAT] gave us national and international appeal, flexibility to establish new roles, titles, even salaries. Also, we could unleash a spirit of experimentation, and not be weighted down with some of the traditional challenges of getting a newspaper out.

Mobile-first from the beginning

“From the beginning, STAT was set up as a mobile-first platform. A number of free daily newsletters have played a big role in our success so far, in terms of attracting and expanding audience,” he said.

Launched in November 2015, STAT is headquartered in Boston but is separate from The Globe newspaper, though they share content. It has bureaus in Washington, New York, and San Francisco.

As of mid-February STAT had 54 staff members, including some 33 journalists. Nearly a quarter of the staff are multimedia producers or software developers. STAT produces daily news, investigative articles, and narrative projects as well as regular video features and a biweekly podcast.

STAT is by far the largest of three niche operations started recently by The Globe. The others are BetaBoston, focused on the city’s tech scene, and Crux, about the Catholic Church and faith. Earlier this year, the Globe said it would stop supporting Crux financially, citing a lack of ad revenue. The Knights of Columbus, a Catholic fraternal organization, has stepped into the breach. The paper also has merged BetaBoston into bostonglobe.com.

The “vertical site” strategy is part of the Globe’s attempt to capture a broader audience across the USA and overseas, which it has undertaken since Henry bought the paper from The New York Times in 2013.

Read a wide-ranging interview with top STAT managers in the WAN-IFRA Report “Alternative Revenue Streams for Publishers,” available free of charge to WAN-IFRA members and for sale to non-members.