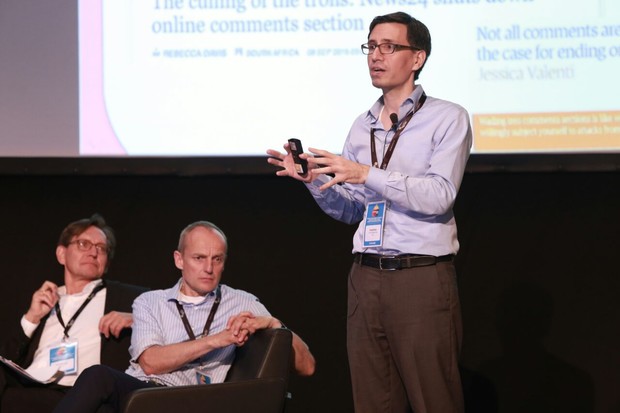 The Coral Project is building an open-source community platform to help publishers find their most valuable readers and connect with them. It is a collaboration between The Washington Post, The New York Times, and the Mozilla Foundation, funded by a $3.89 million grant from the Knight Foundation.

In Cartagena, the Coral Project demonstrated its second, open-source product, ASK, which will help newsrooms receive user-generated content and contributions from readers.

Whether its tools will convince newsrooms who have shut down the ability for readers to comment on all articles, remains to be seen. However, even resolute editors who had closed down or scaled comments were still interested enough in engagement to attend a workshop on managing online comments at the World News Media Congress.

“I have yet to meet a publisher who says I never want to hear from my users ever,” said Greg Barber, who co-hosted the workshop. To date, the Coral Project has reached out to about 300 people in 150 news organisations in more than 30 countries. Each has an interest in having a relationship with their users.

The project is developing three products:

TRUST – to get more value out of comment behaviour

With the first app, editors can learn about users and make decisions within the commenting space based on their past behaviour. Released in March, it runs software with algorithms on online comments to identify and rank low and high-quality comments, to quantify users’ commenting background on the site and send alerts to moderators.

“You don’t want to just make sure that the bad stuff doesn’t appear, but also that the good stuff is highlighted,” said Barber, explaining that, so far, the latter is difficult to do with algorithms. To quantify this qualitative data, the base for TRUST are decisions made by humans – users or staff.

Example: The Washington Post pays an outsourced moderation company for 50,000 moderator actions a month. One moderation action can be: a comment in the abuse queue; a moderator looks at it; decides it needs to be deleted; it is deleted. In addition to just deleting the comment, there are insights to be drawn from the behaviour of these users: one person made an abusive comment, and another cared enough – or was annoyed enough – to flag it, which was a reliable flag.

“What we’re leaving on the table is that two important bits of information about two users that we’re not doing a thing with. Now, multiply that by 50,000 a month, 12 months a year,” Barber said.

The system is currently in a closed Beta-stage, being tested by the Washington Post and the New York Times, to integrate the software into their existing online comment sections.

ASK – to receive user-generated content and contributions from readers

The second app, which was shown in Cartagena and will now go into a test-phase, allows for a more flexible interaction with readers. While comments are just one means to connect to the audience, this tool allows editors to put out a call for information, set up a poll, ask for user contributions, personal experiences, save that to a database, move it to a curation model and then export it back out for publication. “Ideally, I would like publishers to make decisions on how conversations with users are conducted as part of their storytelling strategy,” Barber said.

Example: In our “WorldView’s”-blog on the Washington Post we used a tool similar to ASK, to ask users who are Muslim to write in about their thoughts on homosexuality based on the events over the weekend in Orlando. The reporter is looking to get more people’s input on the motivation of the shooter, but it may be a really challenging topic for the comment section. Using a more measured approach, news organisations can provide a space where the user can compose their thoughts in a much slower pace, which can then be selected and published by the reporter.

With the grant running until June 2017, the third open-source product is planned for release by the end of this year. While ASK runs in the background, TALK will be used for live-contributions for real-time events.