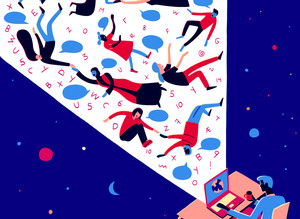 Founded in 1996 by Tinius Nagell-Erichsen, the Tinius Trust is the foundation behind Schibsted newspapers, safeguarding the media group and ensuring “free and independent editorial departments, trustworthiness and quality – and long term sustainable healthy economic development”.

This year’s annual report from the Tinius Trust, called ‘The Future of Platforms and Independent Journalism‘ is an anthology of articles on collaborative ways for publishers to build engagement, compile data, and support advertisers while maintaining journalistic independence. Highly regarded media commentators such as Emily Bell, Jeff Jarvis and Alan Rusbridger highlight the need for a joint effort amongst journalists to remain autonomous as distributed content gains traction.

In his piece called ‘The New Reality of Media‘, media analyst and founder of Baekdal Media, Thomas Baekdal notes that a shift from “an old world of formats to a new world of behaviors” has taken place, suggesting that consumer habits – and not just a move to digital media – have ignited the need for change in the newsroom.

How people behave —their intent—is the new way of thinking about media in the digital world. http://chart.bt/1TGRwt7  via @TiniusTrust

Both Jarvis, professor of journalism and director of the Tow-Knight Center for Entrepreneurial Journalism at the City University of New York and Andersson Shwarz, senior lecturer at the Swedish Södertörns högskola focus on “media ecosystems” that eliminate the linear structure of platform-specific content, in their articles on Death to the Mass and Mastering One’s Domain, respectively. They stress the importance of understanding how all platforms work together, rejecting the old model of division across multiple outlets.

Adam Kinney, Vice President of Data and Analytics at Schibsted Media Group, dismisses the gauge of quantity over quality in his article titled ‘We Need a Data Revolution‘, in which he tells us “to forget hits – engagement is what will save journalism”.