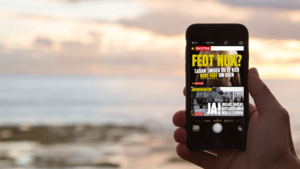 The three media houses will release several journalistic projects every year. Some will be cooperative ventures; others will be produced by one newsroom but jointly financed. And the three will work together on planning and idea development.

After years of running digital subscriptions, we now know what the users in the three Nordic countries think is worth paying for. And with this cooperation, we will prioritise to give them more of that.

Those unfamiliar with the development of paid online subscriptions in the region might be surprised at some of the words in the press release. The stories are described as ‘slower paced’, ‘longer and more in-depth’ and ‘high quality’ – terms that have rarely been associated with tabloid news in the past.

But in the last two or three years, the strategy has been increasingly successful for Nordic news media. For newspapers that have traditionally relied on newsstand sales, the challenge has been to develop a paid online relationship with readers. They started by ensuring dominant market positions and reach via their free sites and apps – such as http://ekstrabladet.dk/ and http://www.aftonbladet.se/ – and continued by methodically converting users to paid subscriptions, analysing precisely which articles and offers led to conversion, and streamlining the sign-up and payment process.

And they are not selling only journalism. EKSTRA reassuringly bundles access to their ever-popular ‘Page 9’ girls, while Aftonbladet Plus includes travel guides and other offers.

Importantly, this is now mostly mobile traffic. There is no longer a big debate about how readers prefer to consume news – it’s clear they are happy to read long-form journalism on mobile devices, and to pay for it.

Even if the story format is ambitious, the topics are resolutely tabloid. The group kicked off with a series on Hitler’s secret places across Europe: as EKSTRA described it, “the abandoned mental hospital, the forgotten monster bunker, the occult Nazi paradise.”

The whole venture is founded on some common interests across the three countries:

It’s a unique venture into quality journalism where three big media [groups] join forces and report about exciting topics that are in the interest of the Nordic users. We know from experience that fantastic stories from our paid platforms work in all three countries.
– Ted Kudinoff, Editorial Head, Aftonbladet Plus

So what other news groups could follow this model? Which other countries share interests in topics across national borders but perhaps not language? It helps if you are owned by the same company – and it’s true that VG and Aftonbladet are part of Schibsted.

In fact, informal cooperative news projects have become common in recent years. The International Consortium of Investigative Journalists quickly organized nearly 400 journalists across 80 countries to jump on the Panama Papers, for example. But in that case, The Guardian and Süddeutsche Zeitung gave away their stories online for free, both in the public interest and to drive traffic.

The question is how to collaborate on stories that your own audience is prepared to pay for. That is surely the real innovation in this Nordic alliance.