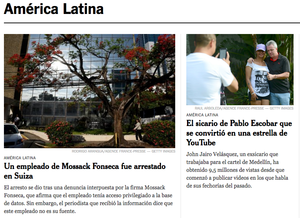 The story of Obama’s trip to Cuba last March was, unsurprisingly,  a huge hit in the US. It was translated into Spanish to serve the LATAM audience. However, the southern neighbours weren’t as impressed. Most South-American countries have good relations with Cuba: it’s only a small country, and they don’t share US’ obsession with Cuba. So, while the American audience was getting excited about the Cuba story, an opinion piece on Argentina was trending in LATAM.

The lesson learned for NYT Global? “How to think not like Americans providing news for Americans, but to think about what the audience that you’re trying to build really wants to know,” said Lydia Polgreen, Editorial Director of NYT Global at the annual World News Media Congress in Cartagena, Colombia, last week.

The New York Times is already growing much faster outside of the US than inside, but its international readers spent half as much time on the site, read fewer pages and are about half as likely to subscribe than domestic readers. The strategy to fix this is simple – increase relevance to increase engagement, which will increase revenue.

But, the competition is fierce, with many publications seeking to expand globally. El Pais started expanding its LATAM coverage back in 2012, The Guardian has become a “global information powerhouse”, and Le Monde launched LeMonde Afrique last year, as one of several French publications targeting Africa’s French-speaking audience.

What role can the New York Times play in local markets?

NYT uses a human-centered design approach to figure out the role that they play in each new market. In countries where trust in big institutions is low, like China, they can serve as an independent voice. In LATAM, they found out that readers want investigative journalism to cover topics that local media shy away from – because of financial or political influence, or low resources. In other markets, NYT’s value is more additive, as in providing global reporting, or feature coverage.

Rather than competing with local newspapers on local stories, NYT aims to find and collaborate with like-minded publishers, who share their “editorial DNA” of independent reporting without fear or favour. Local publishers bring grassroots knowledge and audience, and NYT brings financial resources, editing, and journalistic capabilities, just as it does with non-profits at the moment. “We’re not a substitute for local news, and we’re certainly not here to put anybody out of business,” Polgreen said.

International readers also want help understanding the US, especially in this crazy election year, according to Polgreen, who explained how the current election coverage is completely tailored to the US audience. The same goes for NYT’s cooking app, which is impractical for international readers as measurements are in cups rather than metrics, and temperatures in Fahrenheit rather than Celsius. “These are really strong signals to our readers outside of the US that we just don’t really care that much about them”, said Polgreen, “and that’s exactly what we’re trying to fix.”

Another way to gain new readers globally, said Polgeen, is to write stories about people and places where you want more readers. For example, the Spanish version of Sean Penn’s exclusive interview with El Chapo, which became the sixth most read article on the entire NYT website. “That is pretty remarkable for an English-language publication, it was a historic moment for us,” Polgreen said.

How does the New York Times make these changes happen?

NYT uses A/B testing for everything they do; to find out what language readers prefer, if they want breaking news or feature stories, what subjects they want to see covered and what channels they use. They even go as far as having conversations with people on the streets, on their commutes and in their homes. “Data tells you what and how many of what has already happened, but in-person research will tell you why and what might happen next,” Polgreen said.

“What are the three apps you open up in the morning?” is @lpolgreen ‘s fav question w readers #editors16 #wnc16 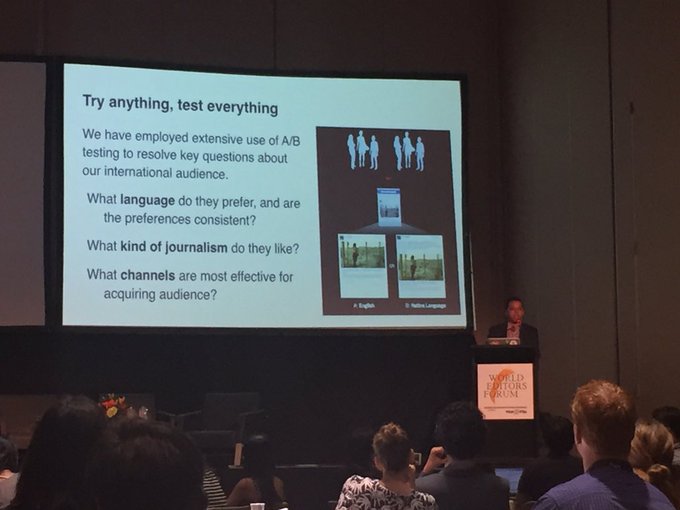 To push for these changes, there is an urgent need for a change in newsroom culture. From changing the way products are built, to changing the thinking about monetization (as different countries have different payment habits), to finding more innovative approaches to selling advertising. “Most importantly, we need to have the people who are making big decisions about our business future and our journalism decisions to be more diverse, to really enable a cultural change,” Polgreen said.