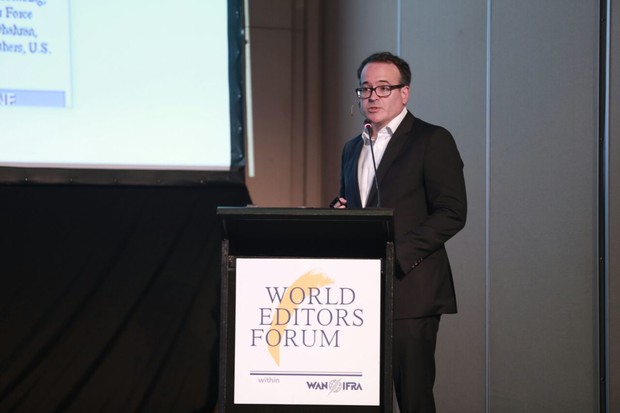 “This is not just about new mechanisms of delivery, but a fundamental shift in how we practice in journalism itself and how we make it better”, Matt Murray told editors at WAN-IFRA’s annual World News Media Congress in Cartagena, Colombia, last week.

Laying out seven guidelines for the WSJ’s transition to digital, Murray said to compete digitally, it was not enough to be a second read.

“We have to be the first read, the prime news source for our readers. And we need to be the last, most authoritative word on whatever we cover.” Matt Murray.

The WSJ’s seven guiding principles are:

1. The most important relationship is with the reader: Subscriber revenue, driven by digital growth, is gaining importance. New technology has raised readers’ expectations and the number of choices they have for news. This requires a dramatic change in newsroom culture to deepen the relationship with readers and compel their attention. And while analytics have become a useful tracking tool, journalists are now, more than ever, tasked with engaging and retaining readers.

2. Need to be able to serve readers on any platform or device: While keeping the print publication strong, the WSJ is shifting more resources to digital, where most growth comes from. This translates to a reworking of job duties – traditional news editors are restructuring around digital output. The roughly 1,500-person global news operation now includes 40 video journalists, a dozen devoted to engagement, another two dozen on mobile products and editing, and groups of engineers, product designers and technical people.

3. Give readers the stories they want: Though traditionally business, tech, and economics-focused, the WSJ has expanded to politics, crime, fashion, and sports in recent years, citing a “hunger for smart, deep reporting” in an “ever-more globalised yet polarised world”. Expanding global coverage in major cities like London, Delhi, Beijing and Mexico City as well as introducing alternative storytelling techniques, like interactive U.S. elections graphics, are some of the WSJ’s major transitions.

4. News matters: Murray noted spikes in readership within minutes of news breaking on wsj.com. Rather than assuming the internet’s commodification of the news, the editorial team selects breaking stories to focus on – like the US mergers and acquisitions where its reporters successfully broke eight out of the ten biggest deals last year.

5. Context and analysis are essential:  Readers want help understanding the news and smart commentary acts as “an exclusive that readers can’t get elsewhere”. The WSJ has put responsibility on its journalists to become experts to provide informed, objective analysis and has also hired columnists for core areas such as markets, politics, China, and tech.

6. Focus on stories that no other publication does or can do:  With the help of new technology to enhance and reinvent storytelling and engagement the WSJ has been able to increase its digital audience. Some examples include a database of Hillary Clinton’s emails, a visual stream of a liberal vs. conservative Facebook news feed, as well as a 12-minute video on fentanyl addiction in the U.S. New tools – like 360° video – can expand editorial content and reach readers like never before.

“Stories like these remind us why we do this work. The best journalism not only brings us news about the world, but moves us, teaches us, and makes us feel more connected,” Murray said.

7. Vital to preserve and improve ethical standards: The WSJ practices “no surprises” journalism by maintaining three in-house first amendment attorneys to work with journalists on their pieces, as well as giving the subjects of stories a chance to hear what the newspaper plans to publish. Murray said subjects deserved an opportunity to comment, and this policy could only improve the journalism and the reader’s understanding of the topic. Even in an “age of rapid-fire publishing”, stories need to remain properly vetted and solid.

To close, Murray said “to bring a vision like I’ve described here for us, to drive culture change like we’re doing at the paper right now, it’s got to be embraced and proselytised by everyone in the newsroom, especially those at the top”.

Emphasizing the need for culture change to adapt to the new mechanisms of delivery, Murray said: “These are challenging days for our industry, but exciting ones too. Whatever the technology in ten or even five years’ time, we know there will be readers seeking quality stories, and someone will be telling them. The opportunity for all of us is right there, waiting to be seized.”