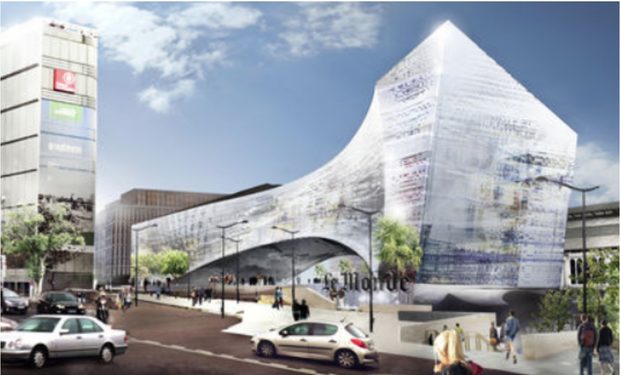 Fortunately for Le Monde (and much to the chagrin of then-president Nicolas Sarkozy) a bid by three left-leaning investors to take over the daily was approved by the group’s board just a few weeks after Filloux’s pronouncement. The three were Matthieu Pigasse, a banker at Lazard; Xavier Niel, one of France’s then-few internet industry billionaires; and Pierre Bergé, the former partner in business and life of designer Yves Saint Laurent.

Under the take-over terms, the newsroom had to hand over majority control of the paper, which it had held since Le Monde’s inception at the end of the Second World War. But Le Monde had a life!

Dreyfus, a long-time associate of Pigasse, was quickly brought in to manage the newspaper and, yes, to start a little révolution. He described Le Monde’s journey back from hell and its roadmap to innovation during his presentation, aptly titled “From an Institution to an Entrepreneurial Adventure,” at the World News Media Congress in Cartagena, Colombia, last week.

Doubling down on digital, but still bullish on print

Interestingly, for all the focus and investment Le Monde is pouring into digital innovation, Dreyfus emphasised from the start that its print newspaper and products are still absolutely vital to Le Monde’s ongoing transformation and future.

“At Le Monde, we believe print is not dead,” he said. “Whatever the difficulties or losses are, people will buy our product, whether that is in print or digital, as long as we have exclusive content. We will survive and grow if we have the best journalists, and that is the first priority for us.”

Dreyfus focused on four critical areas of Le Monde’s transformation strategy: one, that everything is innovation-driven; two, how to leverage its premium content environment; three, news story “makers”; and four, what are the new frontiers to pursue.

Over the past five years, Le Monde has developed and implemented an innovation strategy that has included launching a number of new products, partnerships and initiatives. Crucial to all undertakings, Dreyfus said, is speed to market.

Used to be you came to market with new innovation every 5 years … @ldreyfus @lemondefr: now work on every three months. High bar. #WNC16

Naturally, all those products and initiatives have been supported by aggressive action on social media and multimedia channels, Dreyfus said.

“If there’s one number I want you to remember, it’s the 20 million visitors we have on social media. It’s where the future is.”

Le Monde has extended that level of engagement “offline,” as well, he said. The paper started “Le Monde Festival” in 2014 to give its audience the opportunity to exchange ideas with newsroom staff, participate in debates, meetings, etc. “This really puts us at the heart of the conversation with our audience and shows that this is not a one-way conversation,” said Dreyfus.

With that young audience in mind, Dreyfus said Le Monde will be on Snapchat Discover starting in September. He said video will play a significant role not only on that platform but on all of the brand’s various platforms in the future: “We still need to figure out what our video style is, because younger people are increasingly moving to video to get their news.”

Like many other well-known national and international news brands, Le Monde is expanding its coverage. Last year it launched “Le Monde Afrique,”  a site dedicated to covering the African continent. “We would like to be the first choice for news in the French-speaking world,” Dreyfus said.

Regardless of the platform or medium, though, he reiterated that quality journalism will continue to be Le Monde’s raison d’être.

“We believe there is a future for media and journalism as long as you are willing to invest in journalists. I realise it isn’t easy. I think the Panama Papers is the best example of several things going forward: collaboration, social media, and exclusivity. We collaborated, but we were the only one in France, and everyone at Le Monde was quite proud to be part of this consortium,” he said.

Dreyfus said the newspaper plans to move into a new 23,000-square-metre headquarters (see top photo) next year. Just another “big move” in the right direction, he said.