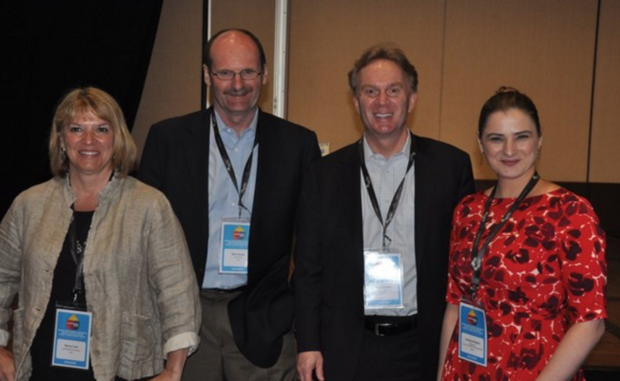 “Helping local media companies find sustainable business models – it’s all we do,” Nancy Lane, President of the US-based LMA, said during this year’s annual meeting on Sunday afternoon in Cartagena.

This year, Lane (at left in picture) pointed to three top trends in media transformation that she sees taking shape:

As part of LMA’s efforts, Lane leads an annual “Innovation Mission,” an intensive study tour that takes small and mid-sized publishers to some cutting-edge media companies (as well as the digital giants such as Facebook and YouTube) to see what lessons they have to offer.

Click here to see our recent interview with Nancy Lane.

Peter Newton, Chief Revenue Officer of GateHouse Media, the largest publisher of locally-based print and online media in the US, then took the stage and described how his company has more than doubled in size in the past two years and intends to continue to expand its US footprint through further acquisitions.

Newton (second from right in the above picture) added that events is a big market for GateHouse and that they’ve developed four core events that are supplemented with ad hoc promotions.

In addition, GateHouse operates a separate business called Propel Marketing, of which Newton is in charge, and which develops digital solutions for small and mid-sized businesses. We’ll be writing more about GateHouse and Propel Marketing in a forthcoming blog post.

Taking a look at broad trends over the coming 4-5 years, speaker Rick Ducey of BIA-Kelsey, USA, told participants that “It makes sense to be worried about digital revenue – that is where growth is going to come from.” He added that, today, “ ‘digital’ means ‘mobile’ 65 percent of the time” for US-based media companies.

In addition, Ducey (second from left in picture) said that while he thinks newspapers can “win” at digital, they need to get moving now and offer more video and audio content.

Furthermore, while print revenues are down, and expected to continue to decline, he said he foresees newspapers remaining an important part of the advertising mix, though that position is being challenged, which is why it is essential that publishers grow their digital revenues.

Moving readers from print to tablet in Brazil

“Our challenge is to get people to migrate from print to digital,” said Andiara Petterle, Vice President of Newspapers & Digital Media for RBS Group, Brazil.

Petterle (at right in picture) told the audience that one major way that RBS is working to achieve this is through an initiative that aims to get readers using tablets. RBS’s regional title Zero Hora (ZH) now has a new subscription model where customers get a customized tablet.

The idea came about through a simple question: “How much does it cost per year to print and deliver the newspaper per subscriber?” Petterle said it turned out the answer was almost exactly the same as it would be to buy every reader a tablet, and so that after the first year, if subscribers can be maintained, the margins should grow dramatically.

“We started this pilot project with 3,000 tablets,” Petterle told us recently see more at link below), “which we expected would take a long time to give away, but they were gone in two weeks. And then we started to redesign the operation, and we partnered with Samsung and are now developing the distribution strategy together with Samsung.

“We might end this year with about 10,000 tablet subscribers, and our idea in the next three years is to reach 40,000. If we can do that, we can really control it and deliver pretty much anything we want – and we won’t be dependent on any other platforms.”

Click here to see our recent interview with Andiara Petterle.