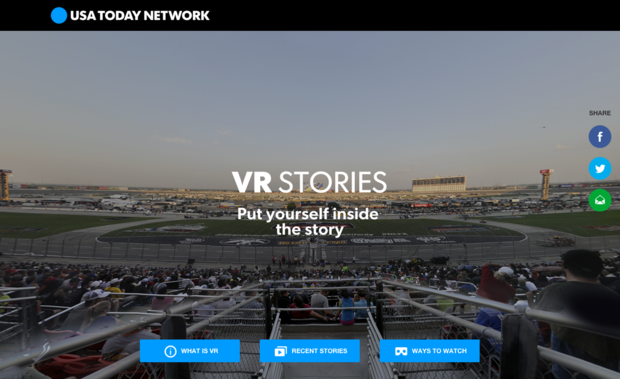 “The challenge for VR right now is to move itself from a kind of gee-whiz ‘this is cool to see’-technology to an actual storytelling environment, where we can bring people to different places on a regular basis, and not just show them part of a story, a protest march or even the aftermath of natural disaster, but where people can actually accept it as new rather than some kind of quirky visual thing,” Callaway told the World Editors Forum.

David Callaway will be moderating a panel on VR/AR at WAN-IFRA’s 23rd World Editors Forum in Cartagena, Colombia on 12 Jun 2016 to 14 Jun 2016, in which he’ll discuss the critical question as to how to take this technology – that is in its infancy – to something that is used by millions of people daily.

David Callaway, Editor-in-Chief USA TodayIn an interview with us before last year’s World News Media Congress, you mentioned that VR would become a major trend in 2016. Now half-way through the year, how do you feel about it becoming mainstream?
I think it is still continuing to become mainstream. As opposed to last year when people were still experimenting with it, everyone is doing it right now: USA today, the New York Times, the Wall Street Journal, the Washington post and of course loads of the big tech companies. But it is still not a routine storytelling vehicle that we thought it might become a year ago. It is really technical limitations in putting the stuff together that is causing it.

Have there been any changes in audience engagement with VR?People are enjoying and playing around with our VR and 360° videos, but it is limited by the ability for people to access it. Also, if you look at anybody’s web traffic at any given day the written stories vastly outnumber the videos and that is in part because the videos take longer to put together and VR takes longer still to put together. Until we can start routinely putting out VR pieces on a daily basis the engagement and traffic numbers will be limited.

* That – in essence – is one of the reasons behind “VRtually There”, the first branded VR news experience that will be launched before the end of the year. It aims to tell daily news stories in VR, beginning the regular production of VR subjects.

What is the current focus in the adoption of VR within USA Today?
We’re still trying to focus on how VR can be used in the storytelling process. Still very much a content and technology focus. The sponsorships will come when we can master the content and the technology but the main focus is how to bring VR to life as a storytelling vehicle versus just a visual sensation.

Would you say there is common ground in the industry on editorial guidelines for producing VR ?
We don’t have a set of guidelines specific to VR. We’re still experimenting and searching for best practices, there is still lots of technical limitations. Not only with distribution but even just with the experience with VR. There is a tendency to get dizzy in the Oculus Rift, and they need to figure out how to overcome that. We’re still very much in the experimental phase, but when you think of that at USA Today we did our first VR project 22 months ago, we’ve come a very long way. We’ll continue to grow this year and in the next.

How has the VR-team at USA Today developed since its start?
It started as just a couple people playing around with an Oculus Rift headset, and it is growing all the time. We don’t outsource, we want to do it ourselves. Our VR team is composed of product people and editorial people, who all do other things as well. There are somewhere between three and 15 people who are really producing VR and/or 360° video most of the time. And then we have distributed 360° cameras to more than 50 Gannett newsrooms, who are experimenting with it at their own pace. It’s getting much bigger – fast.

Have news organisations found new ways to monetize on VR?
I don’t think we’re quite there yet. We have had sponsorships with some VR projects, like the most recent one on IndyCar which was sponsored by Verizon. But, until we can achieve critical mass in traffic and engagement, the sponsorship opportunities will continue to be quite limited to Gee-whiz type stuff. The sponsors are interested but they need to see more progress.

What impact do you think VR can have on journalism?
If we can take our audience to the source of where the news is happening and have them experience it like our reporters are experiencing it, that is a whole new way of telling stories. In the old days, you would read what somebody else was experiencing and you would experience it through their words, then through the sounds over radio, then through video shots over television, Virtual Reality will now actually bring you to the event.