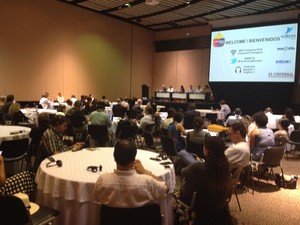 The annual WAN-IFRA press freedom roundtable took place on Sunday, 12th June ahead of the opening of the World News Media Congress in Cartagena, Colombia.

Society’s transition from war to peace is a challenging process. Going from a bad state to an unknown state can even create a “panic of peace,” according to Alvaro Sierra, and is something Verashni Pillay related back to the South African experience: the end of apartheid creating a fear of civil war among many white South Africans, perceiving the transition as a threat as opposed to an opportunity for change.

The Colombian experience regarding the current peace negotiations with the Revolutionary Armed Forces of Colombia (FARC), subject to a high degree of polarisation among the media, served as a starting point for the discussions. All panellists agreed that journalists have a responsibility to support peace processes. As Stephen Rae underlined, media outlets might comes from different angles, but they should support peace: “Media has to promote informed debate and rational decisions instead of emotional reactions,” he said.

Many of the speakers underlined the importance of a change of narrative in the transition from war to peace. If war imposes specific narratives, such as the demonization of the enemy, then similar forms of linguistic adoption equally play a crucial role in sustaining peace. However, it is difficult to control narratives and the emotions of the story – according to Phil Chetwynd, this is a “crucial challenge for journalists.”

Verashni Pillay underlined that it is important to avoid simplifications of a situation while covering conflict, as well as the transition to peace: “It is easy to get stuck in ‘easy narratives’ instead of inventing new ones,” she said. In her opinion, the role of the media in post-conflict states is to create an understanding of the new world order. She underlined that journalists foremost are in the service of truth: “We journalists should rate ourselves in relation to the truth, not to government.”

Sergei Sokolov said that the main task of journalists in conflict areas is to “determine the truth and destroy the myths,” illustrating with the current “information war” in Russia that began with the crisis in Crimea. He underlined that journalists have to be rigorous in registering crimes committed by both sides during a conflict because they may well be the only witnesses.

In many societies the absence of war does not necessarily mean peace. Gabriela Minjares stressed that the responsibility of journalists “does not end with the end of the conflict.”

However, how should journalists who are used to reporting on war even begin reporting on peace? The panel agreed that the change from covering war to covering peace requires a change of mind-set. Media is a part of society and journalists are required to manage its transitions. Therefore, how media is reporting during a conflict, as well as under – and after – a peace process is a determinant factor in the destiny of a country.