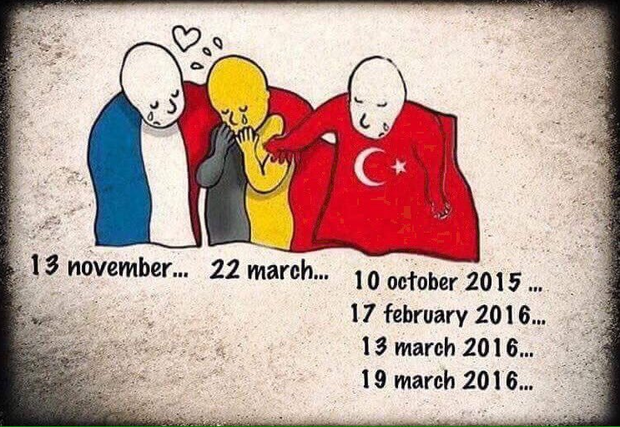 Image: A revised version of French cartoonist Plantu’s sketch. Originally only depicting French solidarity with Belgium, the Turkish flag has been added to point out the lack of attention for terror attacks in Turkey (please note: this image was created before the Istanbul Airport attack on June 28th).

Dutch readers recently criticised the public broadcaster NOS for a lack of balance in their coverage of terrorism, claiming that the attacks in Turkey received a lot less attention than those in Brussels and Paris. While it’s geographical remoteness and the complexity of the Turkish story may have contributed to its lower priority on the news agenda, it’s cultural significance should have largely made up for that. With a population of 400,000 to 500,000, the Turkish/Dutch are the second largest minority community in the Netherlands, which has a total population of 17 million people.

In response to the criticism, Marcel Gelauff, Editor-in-Chief of the NOS explained to readers that the deaths in Turkey were obviously not worth any less and that the news agenda is set based on the relevance of its stories to the national audience. But, he added: “We may have underestimated the impact of this story on our society.”

1) News almost 100% produced by white journalists
Research carried out by well-respected Dutch newspaper NRC last year found that only three percent of journalists in nine surveyed newsrooms in the Netherlands is of non-western background. And that lack of diversity is exactly why these stories are overseen, according to Jacco van Sterkenburg, Assistant Professor at Erasmus Univeristy, who has done extensive research into race and ethnicity in the media – particularly in the sports world. “Nobody is looking at the story from a Turkish perspective,” he told the World Editors Forum, “it’s just not so much on the minds of newsrooms who are mostly white.”

The Dutch media have a “white spot” and their coverage is very one-sided, claims to John Olivieira, a marketing director and business leader who has more than 15 years of experience working in Dutch media. In an opinion piece last week, editor and columnist Hasna El Maroudi, wrote about this so-called “white spot”, using the coverage of the killings of Alton Sterling and Philando Castile by police officers as an example. It completely ignores the essence of the issue: racism in the US police corps, she wrote: “Rather than journalistic prudence, she says the newsroom is failing to make any editorial choice, this is despicable.”

2) Awareness increasing, but concrete action still in its infancy
“Clearly, the issue of diversity is no longer an inside thing,” said Andrew Ramsammy, Director of content projects and initiatives at American Public Radio International at the Public Radio News Directors Inc. conference in St. Louis, US, last month. News organisations in the Netherlands who realise that something needs to be done to overcome the lack of diversity, have taken small steps in the right direction. “De Volkskrant hiring a Moroccan/Dutch Columnist shows that there is a conscious effort to do something about it,” says van Sterkenburg, “but these initiatives are not happening at a large scale.”

The lack of receptiveness from newsrooms to address the problem astonishes Olivieira, who questions whether senior editors actually acknowledge the problem at all. A person of colour himself, he feels that foreign media represent him better than national media does. “Even though the world looks differently at me, I feel Dutch,” he said, explaining that diversity is self-evident to him and to the younger generation, but for senior editors, who are calling the shots in journalism, that may not be the case.

3) Why the need for diversity in newsrooms has become critical
If you are a white journalist surrounded by white people, you will miss a lot of things around you, and you’ll miss context in certain situations, according to van Sterkenburg. “You can only be aware of that if you have a diverse newsroom with people from other backgrounds that will confront you with different perspectives,” he said, explaining that self-reflection on own prejudices could improve among journalists in the Netherlands.

Journalists that do make it in the newsrooms have experienced the effects of it first-hand. Mixed-race show host and interviewer for RTL and BNR, Diana Matroos, spoke out about discrimination on the work floor last year. “I saw an email correspondence saying I wasn’t allowed to present a certain show because my skin colour was “too intense”.” Moreover, it’s not unusual for journalists of non-western backgrounds to be asked to cover just those subjects related to their cultural background, rather than general news.

These practices dismiss journalistic skills and may scare away non-western journalists to even apply for positions in mainstream newsrooms. While some editors would argue we should focus solely on skills, in reality, this colour blindness ignores the benefits that come from having different perspectives, languages and network in the newsroom. Journalists with different backgrounds are likely to pitch different stories, ask different questions, and provide context to unknown worlds, avoiding common prejudices.

Commercially, it is becoming indispensable to diversify newsroom, said Olivieira. If a large group of people does not feel reflected in the current coverage and you want to engage that audience, you need to be more diverse. “If newsrooms are not evolving, they will cease to exist,” says Olivieira. “Mostly white newsrooms are outdated and with the pressure from audiences, newspapers can no longer afford not to address the issue.”

4) Recruiting more diverse journalists is really not that difficult

The lack of diverse candidates is often brought up as the main obstacle: universities are mostly white, and thus newsrooms are mostly white. “Let’s call bullshit on that argumentation,” said Ramsammy. And De Correspondent proved him right when they overtly acknowledged their lack of diversity last year to go on a public hunt for non-western journalists. Using talent scouts and looking outside of the universities, they pair up new-hires with their journalists to train them language or journalistic skills if needed.

It turned out, they weren’t looking for a needle in a haystack: 265 people applied, two non-western journalists were hired, the network of freelancers diversified and a lot of positive feedback came from its members. Since then, several news organisations have contacted De Correspondent to request non-western candidates, but the initiative has not had a snowball effect on mainstream media.

5) Solutions from global journalism industry
Starting the dialogue has proven successful in the US, where large tech companies like Google, Twitter and Facebook started publishing their diversity figures in 2014. Since then, a “diversity market” to tackle the issue has developed in Silicon Valley. New tech startups offer solutions such as hosting blind interviews, using data about past employees to predict who their successors should be, crafting job descriptions that attract a wide spectrum of candidates, and so forth.

Another way to overcome the lack of diversity is to apply the Rooney rules used in football to the journalism industry, says van Sterkenburg. For every candidate you invite for an interview, you’ll invite one minority candidate as well, which increases the likelihood of minority candidates getting hired. But, he adds, there is a need for structural measures. One starting point could be Ramsammy’s seven concrete ways for public media to diversify their workforce: 1) diversify your image 2) make efforts out to more diverse candidates 3) hire diverse staff in the newsroom specifically 4) use content as a recruitment tool 5) prioritize visual journalism 6) stop unpaid internship as it excludes anyone not privileged to work for free, and 7) form diversity councils