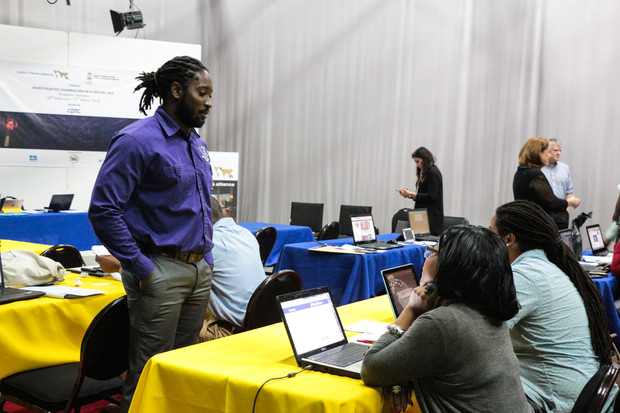 For journalists in the Caribbean, the small size of the region is not always an advantage, says Wesley Gibbings, President of the Association of Caribbean Media Workers (ACM). “You’re not dealing with millions of data samples or points of information, you’re dealing with a much smaller quantity. But accessing that small quantity is extremely difficult,” he told the World Editors Forum.

Only five of 20 countries in the Caribbean Community (CARICOM) have a Freedom of Information law – and even those that do have their own roadblocks. Many documents and institutions are exempt from these laws, and officials clamping down on information or adding to the list of exemptions happens at the drop of a hat, Gibbings said. “The information laws are used mainly as a means to silence journalists as opposed to actually taking full action against people for breaching the law. There is also this long-standing culture of secrecy in our societies.”

To help journalists work around these obstacles and find ways they can retrieve and use data to enhance their stories, the Public Media Alliance (PMA), supported by UNESCO, organised a three-day investigative workshop in February this year. The World Editors Forum interviewed Steffon Campbell, author, lecturer, and researcher, who facilitated this workshop.

What is the current status of investigative journalism in the Caribbean ?
Journalism has been around and has been thriving, when it comes to going much deeper beneath the surface, that’s where it’s still lacking, and there is still a great need. One of the main issues is when there is no Freedom of Information Act. This restricts access to certain types of data which inevitably has an impact on the type of stories that journalists can report and focus on. The second restriction is that most of the documents that are publically accessible, aren’t online, they are still hard copy. Even when you go online to do some data mining, you won’t find much because it isn’t in that space to begin with. And we’re not even talking about the tedious process of application and acquisition of these documents, which has an impact on how soon or how well a journalist can put out a story.

What kind of information is difficult to access?
Anything that has to do with the governmental budget, or documents considered to have an impact on the national security, are exemptions. They can always say a document falls in one of the exemptions, and because they are so vague you’re unable to access it. A lot of journalists want to do environmental stories, and one of the exemptions in the Jamaica Access to Information Act is that you can’t access any documents relating to the heritage sites in Jamaica, which is contradicting directly.

La Nación in Argentina has built a data team in 2011 to start building data sets that the government is failing to provide. Is that something that happens in the Caribbean?
I don’t think there’s a collective effort to do something like that, but it is extremely necessary. That’s where we wanted to start with the workshop to show people how important it is. One of the suggestions we made to journalists to work through these issues is to search for information in European or American websites, or even the United Nations, because these countries and organisations have quite a lot of data on the Caribbean.

What impact could investigative journalism have in the region?
There’s so much to gain. One of the foundations of a good democracy should be freedom of information in addition to access to information: the journalist as a gatekeeper. Previously a journalist was the person that held all the information and decided what could come out, but I think the role of a journalist may change into one who facilitates and points the population in the right direction for them to access further information. It may not be to provide all the information, but what is a starting point for the population to continue searching for themselves once that information is out there. It leads to a much more enlightened population, a population that can hold their leaders much more accountable and even hold themselves accountable because all of this information is out there and accessible to anyone.