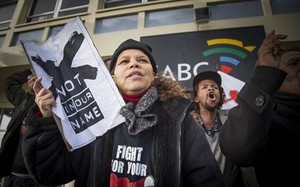 Eight journalists, who were suspended when they expressed concern over the state broadcaster’s protest policy were fired last week. Half were dismissed, while the remaining four faced a disciplinary hearing at Johannesburg’s Labour Court this week. On Tuesday, the court ruled that the SABC must reinstate the journalists, but the public broadcaster quickly appealed the decision and, at press time, was not allowing the journalists back into the building.

While the SABC’s decision has caused months of controversy and protests, the crisis has become an unprecedented show of solidarity for journalists, as the country calls for the reinstatement of journalists’ jobs and an end to media censorship.

South Africa’s media crisis has taken numerous twists and turns since the May ban. The SABC was initially unapologetic about its original decision, saying that it would consult with its legal team and challenge a July 11 ruling by the Independent Broadcasting Authority of South Africa (Icasa), which ordered the SABC to broadcast the protests. Then, last Wednesday, the SABC made a surprise announcement that it would comply with the Icasa.

Meanwhile, the ruling ANC party has condemned the public broadcaster, accusing it of censorship, in a 180-degree turn from its comments in May that the SABC’s ban was the “best decision.”

Dumisani Moyo, an independent media consultant in Johannesburg and the Africa regional manager of WAN-IFRA’s Strengthening Media and Society programme, says the ANC’s change of heart could be due to the upcoming local elections in August.

“The SABC is very vulnerable to political interference, and at times it has been more pronounced,” says Moyo. “This new development is yet another moment where you can see what the party wanted to do ahead of the elections – to make sure that the broadcaster does not put the party in a bad light.”

Moyo says that the original decision to censor the anti-state violence could have thus been led by a certain sense of opportunism “to make it appear that the ANC is still the people’s party.”

And while the ANC has influenced the presence of “sunshine television” – providing the party with a positive image via the media – Karabo Rajuili, a member of WAN-IFRA’s Strengthening Media and Society programme and Advocacy Coordinator at South Africa’s amaBhungane Centre of Investigative Journalism, says that the current crisis is above all a question of party infighting.

“We’re seeing a lot of the ANC’s internal battles play themselves out within a number of state institutions, from treasury to defense to intelligence structures,” says Rajuili. “We’re seeing factions of the ANC taking different positions based on an interest in a rise to power or trying to get access to state resources.

“It’s problematic because internal battles of the ruling party shouldn’t have any bearing on what happens in democratic institutions.”

Since the crisis began, many questions have also been raised about the competency of the SABC and its leaders’ ability to manage the mammoth public institution. The ANC’s Jackson Mthembu said in early July that the broadcaster continually moves “from one crisis to another” and that “at the highest managerial level, [the broadcaster was] lacking.”

In a 2014 report by the public protector, the SABC’s controversial COO, Hlaudi Motsoeneng, was found to be “dishonest” and allowed to operate above the law. The report recommended corrective actions be taken against him for lying about his matric certificate, raising his salary and irregularly increasing salaries of other staff members.

Moyo says that Motsoeneng’s qualifications speak for themselves. “The SABC runs so many radio and TV channels – it’s a massive institution – and it requires a certain level of complexity,” says Moyo. “I don’t think he is at that level of competency.”

With the ANC pitted against itself and the SABC, the four journalists have approached the Constitutional Court – South Africa’s highest – over the broadcaster’s protest policy. Regardless of the judge’s decision, the months-long SABC crisis has proven an impetus for solidarity in a country where journalists have traditionally lacked trust and support from their communities.

“There’s been a very strong civil society reaction,” says Rajuili. “There’s been a lot of discussion and talk about what’s going on at the SABC, and a strong showing of support and solidarity [for the journalists involved]. The general sentiment is that the decisions by Motsoeneng are completely outrageous.”

Rajuili says that the strength of the public could even be enough to keep the issue in the minds of South Africans for some time.

“I don’t think this issue will die down anytime soon,” she says. “It defies journalists’ rights and it’s very unlikely that Motsoeneng will be able to push through the ruling without a civil society reaction.”