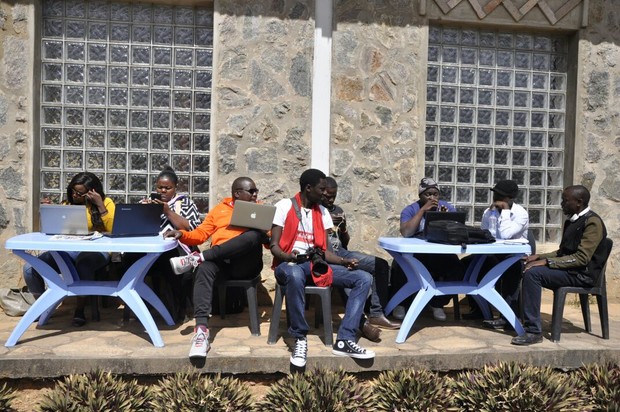 Image: The Post reporters set up a new ‘open-air’ newsroom at the Cathedral of the Child Jesus, outside the office of the Archbishop of Lusaka – by Joan Chirwa-Ngoma.

“We have evacuated all our reporters,” Joan Chirwa-Ngoma, the Managing Editor of The Post  said in an email to the World Editors Forum. “About two hours ago, busloads of PF cadres came to our temporary newsroom, with a few getting off the buses to assess the situation,” she wrote.

The newspaper has received threats since the government besieged the head office and the printing plant of the newspaper on June 21st, to demand immediate payment of disputed tax arrears of 53 million (EUR 7800). The state police switched off the printing presses, locked up the printing plant and ordered all members of staff to vacate. However, ahead of the general elections next month, its journalists refused to stop working and the paper has been coming out, although at a much-reduced volume.

On Tuesday midnight, 15 heavily armed policemen and five ZRA officers raided the house of the paper’s IT manager in search of “illegal goods”, as they were told it was being used as a distribution centre. One of the officers at the scene said they had been sent to look for today’s edition of The Post. According to Chirwa-Ngoma, they found nothing.

Three weeks ago, the Director of the newspaper Fred M’membe, his wife, Mutinta Mazoka M’membe and Editor-in-Chief Joseph Mwenda were arrested when they tried to enter the Lusaka newsroom. Three of them were released on bail, reported Le Monde Afrique/AFP, but are now charged with “attempted burglary” and “forgery”. 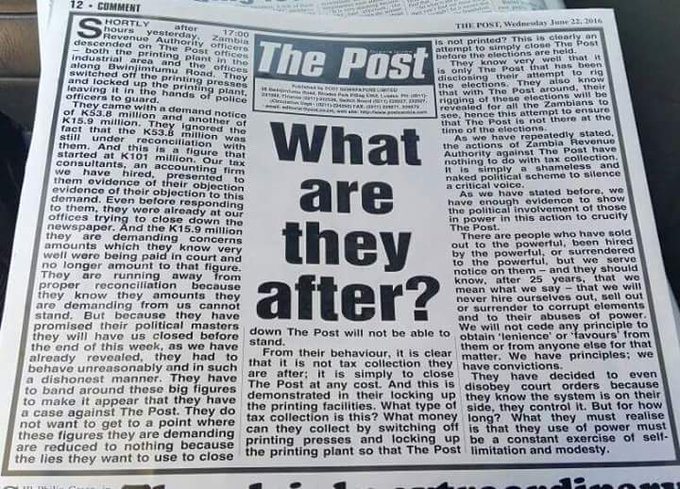 78 people are talking about this

Tax arrears or censorship?
Joseph Mwenda, the papers Editor-in-Chief accuses the government of censorship. “It’s an abuse of power on behalf of the Zambian tax authorities,” Mwenda told Le Monde Afrique/AFP. “Even when served with a stay from the court, they refused to obey it and went ahead to close our two premises, sent staff away, demanding lump sum payment of the disputed figures,” said Chirwa-Ngoma.

WAN IFRA has written a protest letter to President Edgar Lungu to express concerns that the closure of The Post will have “a seriously adverse impact on press freedom in Zambia”, and to express outrage at the reported beating and arrest of editor-in-chief Fred M’membe, his wife, and the newspaper’s deputy managing editor.

“We call on you to take all possible steps to ensure that The Post is allowed to operate throughout the election period so that it can contribute to free and fair elections,” Tomas Brunegård, President of WAN IFRA, and Marcelo Rech, President of the World Editors Forum wrote.
In April this year, before the disputed tax case, Chirwa-Ngoma and reporter Mukosha Funga were arrested for allegedly defaming Zambia’s President Edgar Lungu in an article published a year earlier. Zambia is rated “Not Free” on the Freedom House index, and it is known for harassment of independent journalists and news outlets.

In response to the continuous threats, the newspaper is adamant that “no regime well succeed to put us down permanently.” Chirwa-Ngoma says it is a political battle: “This government will stop at nothing to frustrate the work of the newspaper. We will not be derailed from our cause, and that is to speak the truth.”