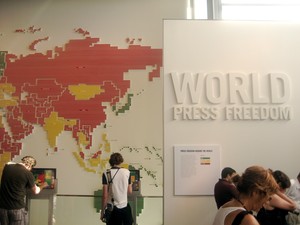 Dutch startup Publicism is developing a tool to use the innovative technology to promote positive change in our industry. It enables journalists to publish and finance their work safely by guaranteeing the anonymity of sources, bloggers and themselves – hence encouraging press freedom.

The project received €50,000 in subsidies from the Dutch Journalism Fund.

Blockchain is a registry where data and transactions can be stored on a multitude of servers, taking out the need for intermediaries like banks or states. It creates an unfalsifiable history of exchanges that is kept and updated in real time, by all users.

“Decentralization is the essence of blockchain,” Pieter Haasnoot, co-founder of Publicism told the World Editors Forum.

It can be used for many different purposes, from financial transactions, voting, insurances, copyright, tracking art and so forth. But what can it do for journalism?

With all the blockchain craze, I’m surprised there’s still no #blockchainjournalism hashtag out there. Fixed that.

“The concept of blockchain is just as complicated as the technology behind it,” Haasnoot said. While the technology to decentralize transactions already exists, it hasn’t been applied to the journalism industry and it is not very accessible yet. Therefore, Publicism will make it easier for journalists around the world to make use of the technology by building a user-friendly interface around it.

Blockchain to fight for press freedom
The project aims to overcome the challenges that are currently putting pressure on the freedom of the press.

In countries with regimes that are threatening press freedom, security is crucial for journalists to be able to keep publishing. Therefore, Publicism will build a system in which they can work under a pseudonym. Communication through this technology is encrypted so that it conceals the identity of both the sender and the receiver.

For governments to clamp down on journalists, blockchain will provide a real challenge. Decentralizing their communications and financial transactions, the network can in no way be closed down or altered because the data is dispersed over a large number of computers.

“Particularly in countries where press freedom is being threatened, we’ve received many positive reactions to this technology,” Haasnoot said.

Disrupting online content monetization
In the Western world, the press is being threatened by the lack of decent business models. “With advertising revenue flowing to platforms like Twitter and Facebook rather than to news organisations, journalism is under threat,” Haasnoot said.

To overcome these content monetization issues, blockchain creates a direct relationship between news organisations and their users by building a decentralized micropayment system.

While micropayment platforms such as Blendle, Tipsy, or Flattr collaborate with news organisations to offer pay-per-article services, using blockchain will allow a direct relationship between the news organisation and their audience, with the network itself to perform these transactions.

However, it may also enable advertisers to bypass media companies in reaching consumers by paying them directly for testing their products.

He believes that blockchain technology will become important for journalists who will have to work independently: “It guarantees that they’ll have a say in the way they collaborate, publish, do their administration and get paid, without the intervention of other parties. “

With all these developments currently being researched, Publicism will also look further into ways to use blockchain to establish collaborations between journalists.