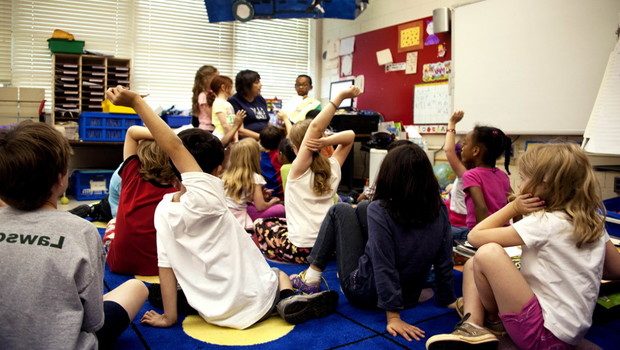 Legacy publishers are struggling to reach younger readers, or so the story goes, with millennial media giants like Buzzfeed dominating the market. But what about the even younger generation that will come along in the post-millennial era? By teaming up with ed tech companies, publishers may be able to reach them while they’re still in school – and, hopefully, before they’re lured into the world of catchy headlines, listicles and cute cat pictures.

One company marrying publishing and education is ed tech startup Newsela. Founded in 2013, the company aims to improve literacy among students aged seven to 18 across the US by rewriting non-fiction content from several publishing partners, many of those newspaper publishers, to fit a variety of reading levels.

Each day, Newsela staff pick four articles out of their partners’ portfolio and adapt them to five different reading levels aimed at students from grade two to 12. The selection is based on interest to teachers, the likelihood of them using them, and whether they revolve around a topic a teacher would teach about in the classroom.

WAN-IFRA caught up with Mark Pan, Newsela’s partnerships strategist, who spoke at the World News Media Congress in Cartagena, Colombia, in June.

“We hope to get students to a point where they’re not just reading that content because of their teachers but that they go on to these websites to read the original articles once they’ve reached that reading level,” Pan said.

Newsela has partnered with nine content providers, including the Associated Press, the Washington Post, and The Guardian, which are paid a licensing fee for each article.

“Publishers always ask about revenue first, about what kind of deal this is,” Pan said. “But what’s less tangible, though much more critical, is how much circulation and viewers they can get among a brand new segment of people, which is kids from second to 12th grade who traditionally don’t read these websites.”

Julie Hoffman, an ELA teacher at Somonauk Middle School in Illinois, often has her students read adapted content from Newsela to help them develop a deeper understanding of the topics that come up in the classroom.

“It’s wonderful because no matter what my students’ reading level is, they’re reading the same information and they’re all able to participate in the same conversation, which is huge,” she said.

She has lots of praise for the variety of texts and articles she can choose from, which benefits both her and her students, but she also agrees with Pan’s take on what a partnership could mean for publishers.

“By the time that the students approach regular newspapers, their experience with Newsela makes it more accessible and reading the newspaper is not a scary thing,” she said. “I think when kids grow up a lot of times they will go to the news that their parents read. And I think if they’re exposed to multiple news sources in school, that could create maybe even a life-long readership.”

Comments like these sound certainly promising, but the question remains whether the kids actually know who produced the content they’re reading. Each adapted news article published by Newsela includes a byline specifying who wrote it but – small as it is – it could easily be missed.

Still, Shelley Sheets, a literacy coach at Ralston Middle School in Nebraska, argues that as long as it’s pointed out to them, students do understand where the content comes from.

“Sometimes they think I actually wrote the articles so I do explain the text-levelling process to the kids. I do go over that with them because I think it’s important for them to understand where the articles originally came from.”

Like Hoffman, she thinks it’s certainly possible that her students will go on to read the original content written by the publishers they’ve become familiar with during their time at school. Ultimately, though, she hopes that they will take away more from their experience using Newsela than simply having found their new favourite newspaper.

“My real hope is that the kids learn to compare sources, that they’re critical and not rely on one newspaper alone but read a bunch of stuff on the same topic.”

And it does sound like her students are little news junkies in the making, with many of them saying that what they love most about using Newsela is learning about what is going on in the world.

And there is plenty to learn about. Recent article examples on the startup’s website range from Iran banning Pokémon Go to swimmer Simone Manuel’s historic achievement of bagging a gold medal at the Olympics.

“Students should and can be interested in all kinds of topics as long as you present them in an interesting way,” Pan explained. “A lot of content providers do this but what’s missing is presenting content in a way that is accessible to students’ reading levels.”

“When most people think of levelling content they think dumbing down. But we don’t remove context, in fact, we add context where it’s needed.”

Currently, Newsela claims that a quarter of teachers in the US have a Newsela account, which would translate to roughly 8 million students accessing the articles provided. They are published in English and Spanish and come with levelled quizzes that test reading comprehension. By signing up for Newsela’s paid Pro account – the company’s chief source of revenue – teachers can gain access to data on students’ performance.

The company is currently focussing on the US curriculum but tapping into other markets and partnering with international publishers isn’t out of the question.

“In order to be really effective you have to be aligned to the country’s curricula and that’s no easy feat,” Pan said. “The Common Core or any curriculum for that matter can be pretty complex, and it takes a lot of time to make sure the articles are aligned with those topics and standards. But once we’ve covered that in the US we’d certainly consider expanding.”

Since a lot of people are using mobile only and many classrooms aren’t equipped with computers, Newsela also launched an iOS app earlier this year.

“Our mission is to unlock the word for everyone,” Pan said. “With the app, everyone can read these articles.”

“Analyzing stories and answering questions about them is only one part of the work, and often the part kids hate,” says Aralynn McMane WAN-IFRA executive director for news literacy and youth engagement. “Teachers need easy-to-use tools for going beyond that.”

She said Newsela is a step in the right direction but that there is still work to do in helping students to truly think critically about the content they read.

“The classic print-based news in education programs were superb at teaching about sources, verification, etc., at helping students do better academically, at developing their skills and interests as citizens, and also at creating news consumers. All kinds of studies confirmed all that.

“But the heyday of those programs is over, and we need a new model. The key now is helping children learn to distinguish professional, validated digital content – as is – from the rest of the glop, and to be able to think about all content critically using 21st century skills.”

WAN-IFRA’s own next moves in this area call for providing its worldwide constituency with a new multi-faceted set of resources and activities. Grouped together as The Veritas Project, the aim is to help children approach all content through the prism of professional reporting, while assuring an understanding of the role of journalism in a democracy and giving them a chance to try journalism themselves.”

“We want this to be the basis for a new era of educator-news publisher partnerships that are even more beneficial even than the old, print-based NIE actions,” McMane said.

Newsela is not the only ed tech company aiming to bring news content to students. In fact, USA Today teamed up with literacy startup Curriculet in spring this year, with the daily’s vice-president of national education sales, John McGee, calling the partnership a “crucial contribution to education” in a statement. Unfortunately, however, Curriculet’s CEO and co-founder Jason Singer announced in an e-mail to users in May that the company would be closing down.

Time will tell if Newsela actually helps publishers reach a new and younger audience. But even if that’s not the case, having this young generation grow into literate, curious and critical readers is arguably something any publisher can get behind.