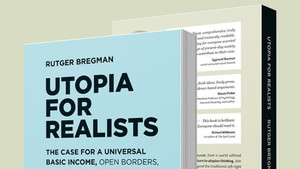 The Correspondent, which has acquired some 47,000 members since its crowd-funded launch three years ago, started publishing its journalism in book form in the summer of 2014. The books are offered on the company’s own kiosk as well as through Amazon and other outlets.

Klein Lankhorst, who heads the books operation, will speak at Digital Media World 2016, which will be held in conjunction with the World Publishing Expo, 10-12 October in Vienna. She offered the following insights in a recent e-mail interview.

WAN-IFRA: What are the goals of the book-publishing operation at The Correspondent?

Milou Klein Lankhorst: We entered the book business to give our correspondents the space to discuss their ideas in greater depth and to introduce our journalism and journalists to a wider audience. It would be a waste for us not to publish books that originate on our platform.

Please describe the relationship between the online journalism, book-publishing, and speaker-agency operations – how do they complement one another, what synergies are realized?

At The Correspondent, we believe that our journalists should be conversation leaders. If you look at it this way, the conversation doesn’t have to be restricted to our online platform only.

Speaking engagements and books are not just extensions of being a correspondent – we believe them to be inherent in the journalism process we envision.

​It has two advantages: we reach a new audience and expand the network of our journalism and journalists. And secondly, instead of revenues flowing to outside publishers and agents, we can invest them in making new journalism possible.

What lessons have you learned since the operation started?

This is what comes to mind now, but we’ve learned a lot more:

What are some of the books The Correspondent has published?

In the Netherlands, we have published two books so far. “Utopia for Realists: The Case for a Universal Basic Income, Open Borders, and a 15-Hour Workweek,” by Rutger Bregman, is the English translation of our first book, which sold more than 15,000 copies in Dutch. The English version has already sold 4,000 copies since its late spring release despite the fact that we handled all distribution and promotion ourselves.

Our second title, “Waarom vuilnismannen meer verdienen dan bankiers” (“Why garbagemen deserve to earn more than bankers”), by Rutger Bregman and Jesse Frederik, was an even bigger hit. We’ve sold more than 27,000 copies. Because of the Netherlands-specific subject matter, however, we have no plans for a translation.

What other titles are planned for the near future?

Our forthcoming title, “You Do Have Something To Hide: Why Privacy Matters,” will be released in Dutch on 13 September with an English translation to follow in 2017. We have two other titles lined up for early next spring.​

Do members of The Correspondent get a discount on books?

Unfortunately, there is a Dutch law that prohibits that. For each title there’s a fixed price that all sales channels need to follow.​ ​But we do give discounts to our members when organizing events and let our members know first when a new book will be published.