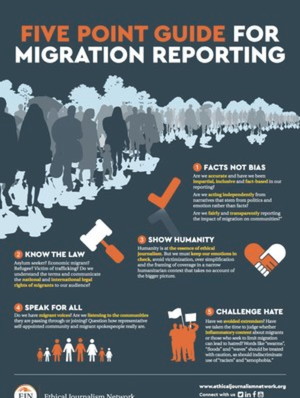 The Ethical Journalism Network (EJN) launched a 5-point infographic outlining guidelines for migration reporting at the Jakarta World Forum for Media Development last week. It acts as a checklist of sorts to optimise fair media coverage about migration. The five steps are: seek fact over bias, become familiar with the law, display humanity, include all voices, and avoid hate speech.

Tom Law, EJN communications officer, told the World Editors Forum that the design is intentionally simple and easy for journalists and editors to understand. He explained that these guidelines are the truncated, easy-to-use version of some of their longer reports. It’s designed to act as both a reminder and a teaching tool for better reporting on migration.

Last year, EJN analysed exemplary and faulty coverage of migration in their in-depth Moving Stories report. The report found that in many cases, newsrooms felt pressure from either media owners about the kind of language and political stance they employed and that often journalists fell into “traps” by politicians that used the media to advance their agendas. It also found that a lot of newsrooms were perpetuated misnomers about moving people. These findings underscored the launch of the guidelines for migration reporting.

“It really is important for journalists to follow the basic principles of journalism, especially when it comes to dealing to people in the refugee context who are very vulnerable,” Law said.

The simple guidelines can, in theory, be applied to coverage of any topic beyond migration. However, Law pointed out that these basic guidelines have not been applied across the board when covering migration.

“We haven’t reinvented the wheel here,” Law said. “These are in many ways the basics of journalism, but sometimes they get forgotten in any story. We wouldn’t have created it if our reports showed that, in many cases, reporting of migration [was] fair.”