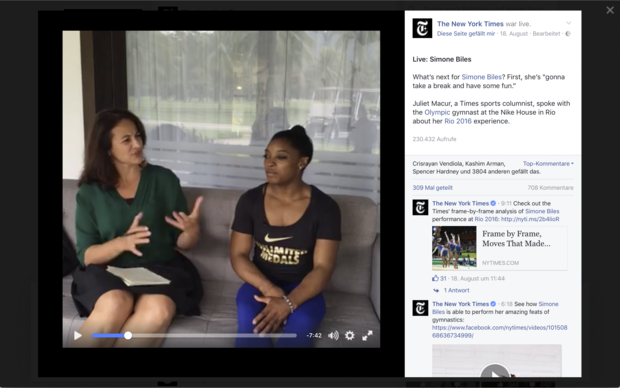 And for news outlets, Facebook Live offers a new opportunity for interacting and engaging with audiences in real time.

“The New York Times website is a major destination, but we also want to be where our audience is, and we have a very engaged, dedicated audience on Facebook,” Louise Story, NYT’s Executive Producer, Live Interactive Journalism, told WAN-IFRA.

The paper has produced more than 400 Facebook Live videos, covering stories as diverse as the Republican and Democratic national conventions, cooking, fashion, and interviews with prominent figures.

An interview with an Orlando shooting survivor, for example, asked viewers to submit questions in the comments. Publishers can also see Live Reactions to broadcasts, as well as average video views, and video completion and retention rates.

Though live-streaming apps such as Periscope and YouTube Live have been around for some time, Facebook’s 1.65 billion monthly users give it a leading edge that publishers are keen to capitalise on.

Gelman, previously a live TV producer, explained that while there is some crossover between the two media, Facebook Live differs in that “you can build up a community around it, and hopefully have a really good conversation ongoing around the content.”

“We can have a little fun on Facebook Live and we can experiment,” he added, “whereas we might offer something that’s a little bit more ‘in the box’ for our own site.”

The Post has 40 people on its video team, including T.J. Ortenzi, who was appointed Facebook Live Editor in July. With most major news outlets now experimenting with Facebook Live, Ortenzi is responsible for how the Post “differentiates itself,” producing original content and “unique story formats.”

In addition, the Post is focusing on two other Facebook Live formats. The first is live events, such as political rallies, “newsmaker interviews,” or the decennial corpse flower blooming at the United States Botanic Garden.

The second is live programming: events that take place in front of an in-person audience as well as on Facebook Live.

They have so far included Margaret Sullivan interviewing comedian Samantha Bee at the Democratic National Convention, and a day-long event on national security.

“Our goal is to be out [live-streaming] where events are happening, where there’s something visual, as opposed to talking heads – which you can get enough of from cable news, frankly,” said Gelman.

The New York Times also is experimenting with a number of different formats – 10, to be exact. These range from live reporting, where viewers go “out on the job” with journalists, to “take me there” stories that transport viewers to beautiful areas such as Central Park or the Gobi Desert.

“We’ve found that people like to go places… so we have quite a lot of segments out in the field where we’re taking people interesting places, and they really seem to like that.” — Louise Story, The New York Times

Another way the Times is experimenting with Facebook Live is game formats, allowing viewers to work together on crossword puzzles, for example, or streaming live illustrations where people in the comments guess what is being drawn.

“It’s not as much about the type of story, as it is about the way you use the platform,” she added.

The Times has eight people working full-time on Facebook Live. As at The Washington Post, they work with journalists across the newsroom to ensure all staff have the skills and knowledge to produce a live broadcast. “You get better the more you do it,” said Story, who added that it is important to “remember the audience is there and engage with them while you’re doing it.”

That level of engagement – whether it’s through asking questions or responding to questions that come in via comments – is crucial to maintaining the audience’s attention.

Though Facebook Live broadcasts can run as long as 90 minutes – and Facebook advises running for at least 10 minutes to be discoverable and capture a substantial audience – Gelman noted the difficulty of sustaining something interesting, even for a short time.

“You have to approach it by thinking a little bit like a live television producer,” he said. “This is not something you start without a plan. You almost need to have, even if it’s not written down, kind of a run-down in your head.”

It is in Facebook’s interests, of course, to secure consistently high video views for its live streaming feature in order to monetize it. Facebook Live broadcasts get a higher priority in its almighty algorithm than do regular videos, and users get a push notification whenever a page or person they follow goes “live” (although that function can be turned off).

At the time of writing, exactly how Facebook will monetize the broadcasts is still unclear, though the network began testing mid-roll ads within live broadcasts in August, and is paying some publishers – including The New York Times – more than US$ 3 million a year to produce live videos.

“The question of whether there’s an audience for it is still to be determined. Facebook has huge potential, but whether people find things that are live more interesting [than pre-recorded video] is inherently unknown.” — Micah Gelman, The Washington Post.