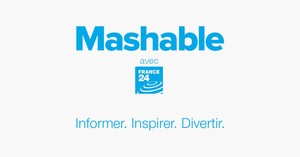 The American startup continues to expand globally. It now has offices in UK, India, Australia and Asia, and similar partnerships with existing newsrooms, such as Telemundo, to create ElPulso for the Hispanic community in the US, and mThai to for the Thai audience.

France24 is the brainchild of former French president Jacques Chirac, who called for a French international news channel to ensure France’s influence in the world. Broadcasting in English, French, and Arabic, the state-owned 24/7 international news channel launched in 2006, and, today, reaches around 50 million viewers, across 180 countries, weekly.

The French partnership is funded equally by France24 and Mashable, and has received additional funds from Google’s Digital News Initiative (DNI). The project has three years to prove its profitability.

Having Mashable‘s dedicated digital journalists and community managers in the France24 newsroom, what are they hoping to achieve? We spoke to Sylvain Attal, Chief editor New Media at France24 to find out more.

1) Innovate by learning from advanced technologies

Tech transfer is one way for France24 to benefit from the partnership. The first step is to upgrade its Content Management System (CMS) based on the entirely new system developed to launch Mashable avec France24.

Besides that, France24 draws from Mashable‘s experience in building a fully-responsive mobile-first platform to keep up with news consumption habits of its audience, and additionally, attract a new, younger generation.

At least 60% of France24‘s digital audience is mobile-first, double that of one year ago. Therefore, the focus in the coming months will be on revamping its mobile website and IOS app.

However, the public broadcaster still prioritizes its TV operations. With scarce resources, hence no team of developers, the digital team is struggling to keep up with the shift to web, let alone mobile

“Historically, we are a broadcast media with a website. In the last four years, we have transformed it into a news website with impact on social media,” Attal said, “yet we did that with the same amount of resources.”

France24 has a strong social media presence in France. It is the leading French TV channel on Facebook with more than six million likes; has almost 300,000 Youtube subscribers; and  645,000 followers on Instagram.

This is crucial for Mashable, the platform known for social media and tech coverage, which is looking to expand its own social accounts. It has extensive knowledge and good relationships with the platforms.

With experimentation at its core, the startup is trying out real-time coverage designed to live exclusively on social media, according to Gregory Gittrich, Mashable’s new chief content officer, in an interview by Joseph Lichterman on Niemanlab.

France24‘s expertise in video distribution, one of its core strengths, sparked Mashable‘s interest for collaboration. However, developing video for the web is a whole new kettle of fish.

The French channel boosted its coverage from eight million videos a month a year ago, to 35 to 50 million today. However, most content is still broadcast material that has been adapted for the web. “You’d think we wouldn’t have a problem with it because we are broadcasters, but we have to rebuild our entire organisation to adapt to it,” said Attal.

With online video becoming a crucial tool to gain audience, especially a young one, both organisations put emphasis on improving and expanding production for the web.

4) Encourage a culture of innovation

It is not always easy to get everyone into a digital mindset, according to Attal, so he welcomes some “fresh blood, interested in innovation”.

“Mashable is all about innovation,” he said, and “having this new team in our newsroom brings in a lot of enthusiasm”. While France24 used to have an innovation lab, Attal now prefers to spread innovation everywhere.

Limited by its resources, the newsroom has recently made some efforts to try out new things, such as using Facebook Live to cover the Cannes film festival and South by Southwest (SXSW), and experimenting with Virtual Reality.

5) Act like an entrepreneur to find new revenue streams

For the state-funded France24, budgets are tight, so it has to find resources elsewhere. For example, a new project for migrants will be launched with European funds, it signed a contract to sell videos to France Info‘s brand new TV channel and offers training through L’Académie France24.

Mashable relies on advertising, with branded content as its fastest growing revenue stream, but, like many news organisations, it is also looking for additional ways to monetize its content.

While advertising is only a small part of the French broadcaster’s revenue, it could benefit from Mashable‘s branded content experience to find new sources of income. What’s more, Mashable avec France24‘s collaborative push into online video could lead to a profitable new revenue stream for both.