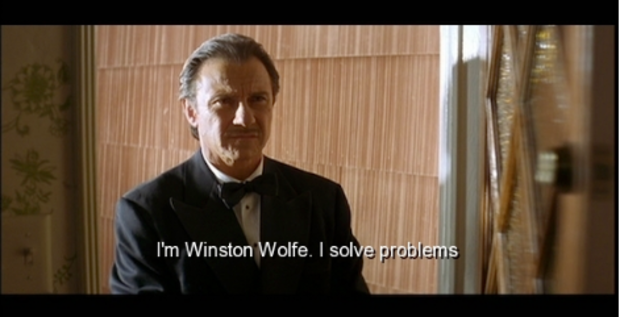 Image: The Wolf Model was inspired by this famous quote from Pulp Fiction

Alberto Puliafito has been a freelance – self-taught – journalist since he was 18 years old. His entrepreneurial spirit led him to become Director of digital-first news site blogo.it, and TVBlog, a platform that connects television fans and critics. He also set up an independent production company called iK Productions, teaches entrepreneurial journalism and wrote two books.

This project subsequently led to the development of another newsletter called “Wolf”, which provides media professionals with knowledge on online communication, business models, social media, SEO, publishing and so forth. Within this second newsletter, the “Wolf Model” was born, and the approach is now gradually applied to both projects for further development.

What is the Wolf Model?
This game plan for developing small or medium projects in journalism goes by the “economy of partial solutions”, meaning that publications should seek as much as possible to diversify its sources of income; sources of traffic; and ways to promote content.

It is based on four key pillars:

1) People
Journalism is seen as a service to its readers, therefore, all content should be of high value and hyper-relevant to its specific audience. The point is to create niche publications such as “Slow News” and “Wolf”, that put the audience at the heart of the business.

2) Content
Producing quality journalism is top priority. And to promote content, the “Wolf Model” encourages using social media, in any possible way. However, the platforms should be used – exclusively – as a promotion tool. The editorial strategy should by no means be led by algorithms.

Many mainstream news orgs are fighting the wrong battle, according to Puliafito, whose philosophy is that “readers are the algorithm”, meaning: “If you serve your community well, people will choose your journalism.”

3) Analytics
That is not to say that algorithms and other analytics tools should be ignored. On the contrary, in the “Wolf Models”, metrics are considered a crucial way to improve the quality of your service; to understand different habits of different audiences, to set objectives and measure results. Use analytics, as a quality upgrade, rather than an editorial guideline.

4) Sustainability
While the “Wolf Model” highly encourages diversifying ways to promote content, Puliafito emphasizes its crucial to bring back your readers to your own “stadium”.

Like a true Italian, he was inspired by the world of soccer, when he said “If you have your own stadium you can have people come and watch a match obviously, but you can also offer merchandising, entertainment, a stadium museum, to visit the dressing room and so on.”

The point is to go beyond mere subscriptions and develop a membership model. “Not only do you want readers to be satisfied with perfectly targeted journalism, you also want them to be proud supporters of the wider project with which they share their values,” Puliafito said.

The “Wolf” project is currently applying this strategy by building a forum, organising live events, and offering courses. Start with a low budget project, like the “Slow” and “Wolf” newsletter, this is then extended to exploit any possible form of monetisation, especially those alternative to advertising such as premium, pay-per-article, subscription, crowdfunding.

In line with the “economy of partial solutions”-strategy mentioned earlier, diversifying your sources of income is crucial for your publication to become sustainable.