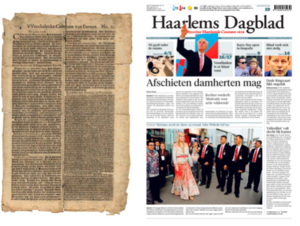 Over the last few years, there has been a wave of redesigns. Legacy newspapers like the Danish Berlingske, Norwegian Aftenposten, the Argentinian La Voz, and even the oldest newspaper in the world, the 361-year old Dutch Haarlemsche Courant, have had a make-over to remain relevant within a multi-platform world.

Pleased with the recent activity in print, Mario Garcia, CEO and founder of global media consulting firm García Media, told us that – rather than just a redesign – many newspapers around the world are having a “rethink” to give print, as a platform, its proper place in the digital world. Such transformations aim to re-establish a brand’s visual identity, package content better and improve reading experience by creating a more intuitive and satisfying content flow.

In a recent article on Politico Magazin, online journalist Jack Shafer brilliantly lays out the superiority of print in terms of its sophisticated design hierarchy that has been established over the long history. “Newsprint has the power to focus me,” he writes, “whereas online I’m tumbling through cyberspace like a marooned astronaut.”

The three essentials of print design, according to Garcia, are: making content easy to find, easy to read, and easy on the eyes. However, in today’s digital world, he adds a fourth aspect: print design needs to allow for visual continuity across the various platforms.

What role for print in a multi-media world ?
Some people only read news on the web, some only in print, others prefer a combination of both, explains Mark Porter, whose UK-based studio MPA redesigned Berlingske, in collaboration with Creative Director Anna Thurfjell. “In order to remain successful, newspapers have to ensure that they are fully serving every part of a very segmented audience,” Porter told the World Editors Forum.

While figuring out how to cater to all these audiences at once is not an easy task, one thing is becoming more and more evident: producing time-sensitive news for print no longer makes sense. “Fast updates, content which invites sharing on social media, is not relevant for print,” Porter said.

Many newspapers have realised that the role of print is no longer for breaking news. “We are seeing fewer and fewer briefs and compact stories in print editions, and more long narratives,” according to Garcia. When a reader picks up a newspaper, he already knows a lot about a story through television, online or social media. “If you have citizen journalism, how can you expect print, 16 hours later, to recap this news?,” Garcia said in an previous interview with the World Editors Forum.

Print has become a medium for analysis and interpretation, according to Garcia. It’s important to have a vibrant and convincing offering on every platform, said Porter, who suggests that keeping some content exclusive to print can enhance the prestige and desirability of the printed product.

From daily to weekly
In the long run, print is likely to become a weekend affair, according to Garcia. “It is the ultimate lean back, relaxed read,” he said. Hence why many news organisations added weekend supplements, or even launched entirely new weekend products.

Berlingske’s redesign came with a proper weekend experience, offering in-depth storytelling in a weekend section, and a glossy lifestyle magazine on Sundays. So did De Telegraaf with its new weekend supplement called “Vrij” on lifestyle, food, travel,homes, boats & cars, and “new life”.

But, while the tendency is to put more emphasis on weekend editions, Berlingske also added a new culture and lifestyle section to its daily newspaper. “It is a bit unusual,” said Thurfjell. “A lot of publishers are making print a smaller project, so this move is courageous and luxurious, yet also demanding.”

Other newspapers like the Norwegian Aftenposten and India’s Mint are also giving their daily editions a chance to grow. “Even the very local newspapers of De Telegraaf group are doing well and thriving every day,” said Garcia.