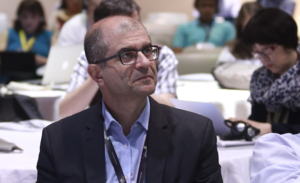 Traditional newsrooms – which Gandour labels “stable platforms of journalistic production” – are still a major source of news, but their decline threatens to cause general informational impoverishment, according to Gandour.

Simultaneously, social media causes a tendency towards “clustering of like-minded individuals”, and the lines between journalism and non-journalism (advertising, advocacy, etc.) have become increasingly blurry online.

These two phenomena together have led to fragmentation and a weakening of the “common public agenda”.

This three-minute video explains how fragmentation is impacting our polarised society and media literacy.

Gandour’s research at the Columbia University in New York involved 1) quantifying the shrinking of traditional newsrooms, and 2) studying the types of information to which citizens have access – from professional newsrooms and/or state governments.

Taking his home country Brazil as a case study, the consequences of fragmentation show a trend that could be relevant to other countries as well.

“I truly hope the topics I raised on the research can be an alert and a contribution to the discussion on what kind of information ecosystem we will have in the future. And, additionally, about how journalism is being reshaped a multidisciplinary activity which is one of the mainstays of freedom of expression and democracy,” Gandour wrote in the Columbia Journalism Review.

Considering the next generation of journalists, Gandour emphasises the important role of journalism schools to maintain focus on the fundamentals of journalism, while teaching the multitude of skills required, in the new fragmented digital environment.