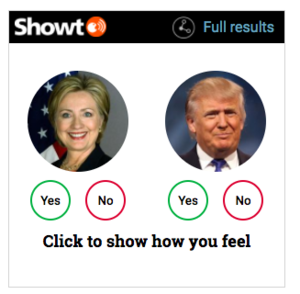 Showt is a nuanced way of polling. In its new Clinton-Trump Showt, voters from anywhere in the world select either “yes” or “no” for either candidate and can do so as often as every three minutes.

Showt controls for people attempting to game the system with incessant votes, but its developers do not discourage frequent “Showting.” Langen and others believe that as people’s opinions change they should be able to express themselves accordingly.

“Not only are Showts recorded, but you can see real-time what people are saying,” Langen said. “Clinton-Trump is a US Election, but it’s a global issue. People globally want to have an opinion and want to voice this opinion.”

Traditional polls during an election are designed by different groups of publishers and are open for a relatively short window of time compared to Showt’s Clinton-Trump poll that will last through the inauguration of the incoming president. Langen believes Showt will become a one-stop shop for journalists reporting on shifting poll data and the sentiments that lead people to change their vote.

“It’s not, let me check 35,000 different Twitter accounts to understand what the hashtags were and the general mindset,” Langen said, “It’s a way to cut through all the information that is out there on social media and have a clear number.”

The results of these polls can be filtered by location (continents, countries, and also states in some cases) and time (24 hours, 7 days, or all time). This way, people analyzing polls can see if there’s been a spike after a major event such as a debate or rally.

Showt is currently supported by 60 languages. The platform gives people around the world a chance to weigh in on topics that may concern them, but for which they cannot formally vote.

Brexit was another major political decision that will continue to affect people not only in Europe but worldwide. Showt tallied global sentiments via 26 publishers that used the Brexit Showt and brought in results from 28 countries.

The platform also features “Showtbacks,” a response from either the individuals themselves or a communications team. Langen hopes that as the company grows, Showtbacks will also range in diversity and provide two-way communication opportunities for businesses.

Outside of the political sphere, Showt has many budding initiatives. Showt is being tested In the Philippines, where it has partnered with TV5. During Philippine Basketball Association games there are Showt prompts so that people can vote for their favorite players. At the end, there’s a “Showters’ Choice,” the most popular basketball player of a particular game.