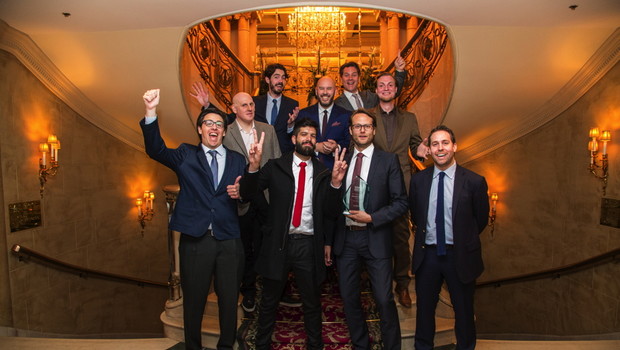 And the winners travelled near and far to Vienna to receive their awards at a gala dinner celebration Tuesday night after the second day of WAN-IFRA’s World Publishing Expo, which also honoured the new members of the INCQC‘s Star Club.


“We couldn’t believe that we won, to tell you the truth, because the project is so new and it’s a side product for us. But we are very, very happy,” said Ariel Tiferes, Project Leader for Muy Liebre from La Nacion in Argentina, which won Best New Product. Muy Liebre is a product for the millennial audience that works as a user-generated space for all social media platforms.

The winners are drawn from WAN-IFRA regional digital media awards in Europe, Asia and Latin America and for the first time from India, Middle East and Africa. The awards are part of WAN-IFRA’s wide variety of awards programs, designed to recognize and share best publishing cases across the global industry.

Malayala Manorama is a large regional media house with operations in print, TV, radio, online, mobile & 50+ publications. The company has a journalism legacy that stretches back more than 125 years.

Malayala Manorama are pioneers in developmental journalism. Manorama Online has emerged as the convergence hub of Malayala Manorama and all its wings in the digital age, offering a slew of products for PCs, tablets and mobile. It is now the No. 1 regional language news portal with 19 years of online news reporting. The coverage is powered by Malayala Manorama daily.

Initially developed in 1998 as an addition to the successful KICK OFF magazine, KickOff.com is now the brand’s first point of contact for readers, bringing them all the daily PSL football news that a magazine no longer can.

Category 3. Best use of online video

Project: Building the Atom Bomb: the full story of the Nevada Test Site

About the Project: Building the Bomb is a video-led interactive which tells the story of the “most bombed place on Earth,” the Nevada Test Site – an area 65km from Las Vegas where the US government carried out almost 1,000 nuclear tests during the Cold War.

To fully immerse the user in the story, each video is scrolled into at full-screen. As the story progresses, the user is taken inside the ghostly remains of “Survival Town,” an artificial village populated with mannequin families, built by scientists and engineers to examine the effect of a nuclear blast on urban areas. The experience builds towards a terrifying countdown, as nervous soldiers scramble into their trenches and suddenly the user is hit by the thunderous shockwave of a nuclear explosion.

To mark the 45th National Day of Oman in November the team at timesofoman.com wanted to explore a subject very close to Omani hearts.

We created an ambitious online project that broke down into intricate detail not just the history and evolution of the nation’s traditional dress for men and women, but also the complex differing styles, dimensions, regional differences and locations. This was also sponsored by the Zubair Corporation who were so impressed with our results.

A highly interactive microsite on timesofoman.com which blended video, interactive graphics, photo galleries, text and quite simply beautiful works of art by the creative team.

The project was delivered across the adaptive platforms at http://timesofoman.com/extra/OmaniDress/.

In October 2015, Clarín decided to join the small group of legacy media that covered a news event through a messaging app. Clarín started from the knowledge that people mainly use messaging apps on their smartphones and from finding out that Clarín’s readers had spent the general voting round of the presidential election checking the news frequently on their phones.

Clarín decided to cover an historical presidential campaign (the first that was facing a second vote in Argentina), the first presidential debate and the day of the election through a Telegram Channel, a messaging service that allowed it to keep citizens informed through that exciting month.

Clarín distributed more than 300 messages that were only related to the campaign from 30 October to 22 November 2015, including around 130 images, 80 links, 20 audio and video clips, and even a PDF file. The channel peaked at 1,800 subscribers – at the time, much more than other major global players with a broader focus. The experience gave Clarín’s newsroom pioneering knowledge about messaging news services, push notifications and news fandom.

To create a mobile-first, payment-based 12-week workout and diet plan for readers to lose their belly fat, on brand with the Men’s Health philosophy of a guy’s guide to healthy living. Launched as a sub-brand, it was promoted across all Men’s Health platforms in Spring 2015, strategically timed for summer training. Reader success stories formed the backbone of the campaign which appeared in the magazine, on the website, in newsletters and on social media.

Belly Off has been Men’s Health’s most successful mobile project. Within eight months the R499 plan had sold more than 1,300 units, surpassing budget expectations and delivering a healthy return on investment.

In 2015, DIE WELT decided to reinvent the digital newspaper. The goal was to create a finishable app-experience that targets a mature audience of loyal users that have grown up with print newspaper. As our most important paid-product, DIE WELT Edition emphasizes a luxurious look and feel with an intuitive and simple navigation. We aimed to be highly interactive, elegant, innovative but classic.

DIE WELT Edition is built to offer a handpicked selection of the best and most intriguing stories, videos and web-features from DIE WELT. We wanted to bring together high quality content, various new news formats and engagement tools, making our new brand available across all mobile devices and platforms: smartphones and tablets, iOs and Android.

Due to the chosen visionary approach and constant user feedback, our interdisciplinary team was able to develop an app that has been rewarded by Apple as “Best of 2015“ in the App Store – the only publisher’s app throughout the selection (iPad). The app reaches 60,000 users on a weekly base and gained a growth of 100% new subscribers per week.

Pictoline is an exclusively visual media company. Through a careful design, Pictoline transforms news and data into images and info graphics that it distributes directly through social media platforms. Instead of centralising the content on its site, Pictoline takes the advantages that are offered by images and snapshots of reality to grow its audience organically.

Pictoline has experienced one of the fastest growth in the region. In less than a year, it has gained more than 1 million followers on Facebook, 200K on Twitter, 100K on Instagram and has a reach of 25 million a month. All of this has been obtained organically without the need for any investment in advertising.

The viral essence of the format has allowed Pictoline to distribute information without losing freshness or relevance, from hard and difficult pieces of news to scientific advances.

In 2015, GE, MEC and Quartz partnered to create World in Motion, a global destination for GE storytelling and content discovery. Its technology-first, social approach creates a fluid home for GE content of various origins and formats. The simplicity of its design and execution reinvents the traditional content hub to support GE’s businesses globally, while establishing deep relevance in local markets. Quartz, Atlantic Monthly Group, UK (together with offices in New York), worked together to implement the program.

World in Motion lives on qz.com as an ENGAGE plus advertising unit, which recognizes the visitor’s location and pans the globe to that region. Upon expansion, the user is immersed in an interactive, 3D globe built with the WebGL graphics library and cutting edge HTML5 technology which allows users to spin, tilt, and zoom the globe in an infinite number of ways. The globe spotlights over 275 pieces of content, spanning 12 regions around the world. Visitors can navigate and filter their experience via region, theme and content format. Filter themes align with the core areas of GE business including energy, healthcare, manufacturing and the industrial Internet.

Engaged users are spending an average of 8+ minutes per sessions exploring content within the interactive globe, the equivalent of 12-15 actions per session.

MUY LIEBRE is a product for the millennial audience created by LA NACION. It works as a user generated space for all social media platforms.

Just a few months after being launched, MUY LIEBRE achieved a loyal community of youngsters that follows the brand on all its platforms. The project is supported by branded content. Despite being a project from LA NACION, the brand is disassociated from the paper and its current digital content portfolio.

During the dinner, WAN-IFRA also honoured four newspapers, all from Germany, into our Star Club, which is the top tier of the International Newspaper Color Quality Club.

The new members are:

The Star Club is an elite group of newspaper printers that have proved their consistency in quality over several years by winning in the INCQC or achieving certifications.

Star Club membership is presented to a company in recognition of outstanding printing quality if it achieves five or more stars by participating successfully in the INCQC or by obtaining WAN-IFRA certification for standardised printing.

One star is awarded for every successful INCQC participation in a competition year, independent of the number of successful entries. Two stars are awarded for the successful WAN-IFRA certification of a printing plant.

Certification is valid for two years, after which it can be renewed.

Click here to see more about the new INCQC winners in a story from our recent epaper.

More coverage from World Publishing Expo and related events is available on the conference blog and on Twitter #wpe16.