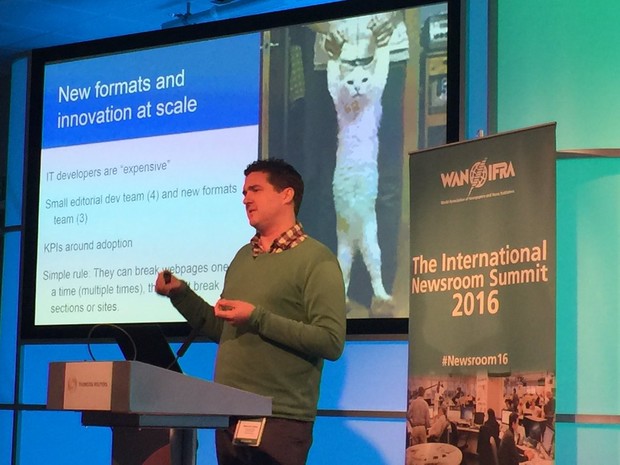 The news organisation has introduced article embeds, overhauled its CMS, and built a robot liveblogger, freeing up journalists’ time so they can focus on important tasks.

As part of those efforts, The Telegraph hired two teams that work closely together: a “new formats” team tasked with developing new formats for editorial content, and a crew of four software developers in charge of coding, explained Malcolm Coles, Director of Digital Media at The Telegraph, at WAN-IFRA’s International Newsroom Summit in London.

The new-formats team comes up with one new format per month, targeting widespread adoption among newsroom staff. Their work includes, for example, interactive maps, visualisations of graphics, share-price graphs, and explainers, all of which journalists can create quickly without needing to know any code.

Over the years, this so-called Particle CMS (a term borrowed from the New York Times) has grown to 4,000 embeds, which offer numerous advantages for the newsroom:

“The problem with digital media is that people writing articles tend to assume that the reader has read every single article ever written on the subject and is an expert. In practice, that’s not the case,” Coles said, adding that while Brexit was dominating the news the most popular search term was “what does Brexit mean?”

Now, more than half of The Telegraph’s stories contain a non-text or image component. In addition to improving efficiency among newsroom staff, these interactive and contextual additions have also increased engagement time for the most popular stories by 25%, and for all stories by an average of 15%.

The Telegraph also introduced a new CMS, built on a what-you-see-is-what-you-need principle, which has reduced the time needed to publish an article by 85%. Using the former system, it took journalists about 27 minutes to publish a simple wire story.

Other tools help journalists discover stories and stay informed about what competitors are doing. Dataminr, for example, alerts newsroom staff to breaking news stories by sending them tweets. Google Trends sends journalists constant reminders about what people are searching for, and Spike lets them know what the competition is doing by informing them about Facebook shares.

For the past six months, The Telegraph has been experimenting with automation and working on a robot live-blogger with funding from Google’s Digital News Initiative.

Ingesting real-time data on football matches from sports data company Opta, the software can run a live blog on its own, and produce and automatically publish live goal graphics. The robot blogger allows journalists to focus on more important games as it can cover non-title-deciding matches and can produce high-quality graphics without the need to involve the graphics desk.

Still, Coles doesn’t believe it will replace human sports journalists any time soon. “It can only work off of structured data. It can’t tell you what the crowd is singing, and it can’t tell you why the managers are having a fight,” he said. “For really, really boring games it struggles to say anything.”

The Telegraph is planning to extend its robot live-blogger to cricket at the beginning of next year, Coles said.