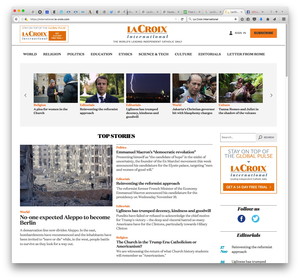 La Croix International is La Croix‘s way to keep up in an increasingly digital, global world. Their mission? To meet demands for an English edition and spread the publication to English speakers all over the world.

But in an era that consists of more newsrooms shuttering their foreign bureaus than creating them, this budding international edition is a rare sign of life, credited to a strong partnership between La Croix and UCANews.

“The industry is a bit pessimistic about the future of the press,” Jade St-Laurent, web and marketing manager for this project, told the World Editors Forum. “We need to reinvent the press. Everyone knows that the current business model is going down, so we need to try other models and to test other possibilities. And if it works, then we’ll continue in that direction.”

La Croix International is the final product of a test site called Global Pulse News that was developed by UCANews. The site was created with the intention of developing a partnership with an international, Catholic media group. In the beginning, Global Pulse News operated as an aggregator of Catholic news from sources such as La Croix. Impressed by the results of the test site, Arnaud Broustet, deputy CEO of La Croix, and , executive director of UCANews, forged a partnership to continue this venture. La Croix purchased Global Post News and revamped it as a news website. Thus La Croix International came to fruition.

Testing ventures through a partner that already has the technology allows for a new digital initiative to get its footing before the digital floodgates are released. As Kelly puts it, “online publications are not newspapers in cyberspace.” Rather, they have different needs and present different challenges for publishers to face.

“We wanted to be careful,” Broustet said. “We launched this project like a lab: like a research and development activity, if I may say – that’s the first intuition.”

La Croix International operates like a true modern, digital publication, merging together the best of both La Croix and UCANews without necessarily investing in new office space. According to Kelly, UCANews has about 40 journalists across Asia, and La Croix has people all over Europe, North Africa, the Middle East. Together they have people who write from different parts of Europe and also the United States, bringing together quite a lot of the world.

Both entities understand the unique, cost-saving benefits that each represents. La Croix was drawn to the existing digital platforms hosted by UCANews and their ability to publish in English. UCANews benefits from the La Croix name and its existing audience.

“[La Croix] had been looking for ways of getting out beyond French and out of France,” Kelly said. “And we demonstrated the capacity to publish and produce, so, that’s where the conversation began, and then it matured into first of all La Croix International.”

Michael KellyA lot of media entities share the desire to succeed and digitize. But Kelly believes the essence of this partnership, in particular, will work because there’s a deeper alignment of objectives and goals.

“The fact that we are basically in the business for the same reason, both of us are Catholic publishers with a broad view of the world, we share a set of values, we share a vocabulary about what’s important, so there’s a symmetry there,” Kelly said.

“Partnerships only survive if the partners are pointed in the same direction and that has a lot to do with the values they share.”