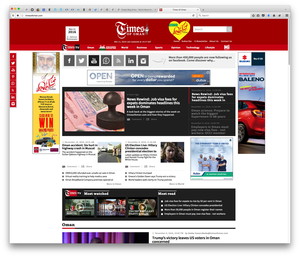 Currently, digital ad revenue is “possibly about 20 percent of our company revenue. It was vital that we did that, because obviously print has suffered, print revenues have suffered all around the world, and Oman is seeing that as well this year, because of the oil price crisis.… So it was a very good thing that we got into digital and started moving that ahead.”

Armstrong said his decision to leave the ad network two years ago “made my advertising department very nervous… but I had too many local advertisers turn around to me and say, ‘Why should I advertise on your website if I can pay Google and get onto your website through the back door for a fraction of the price?’

“So I said, ‘That’s it: No more Google Adwords. If you want to be on my website, you have to pay my company.'”

He continued, “We were fortunate that a year ago we managed to attract a very good commercial officer over from Dubai, who’s really fired the team up on digital sales.”

But let’s jump back those three years (two years and 11 months, to be precise) for a moment. UK native Armstrong had just joined the paper after serving as home page editor at The National, an English-language daily in Abu Dhabi, United Arab Emirates, which borders Oman to the west.

He said, “I was brought in with the mission to make the print edition more relevant and to give it a digital presence, because it really had no digital presence, it had very little on social media, and a very poor web site. We had no mobile site, no tablet site.”

Timesofoman.com is free to all; there is no paywall. In view of the mushrooming ad revenue, Armstrong says in a pensive moment, “Who knows – one day we’d love to be digital-only, possibly, but we’re a long way away from that. The Oman market still loves print, I still love print.…I still think print is an amazing format.”

Times of Oman, the flagship publication of the Muscat Media Group, is published six days a week, with 52 pages in four sections. Circulation has remained steady at about 35,000 for several years; IPSO readership was most recently cited as 125,000. About 65 percent of copies are sold by subscription, the remainder through agents and at newsstands (primarily gas stations, actually). The group also owns the successful daily Al Shabiba, which Armstrong says is the second-most-read Arabic-language paper in Oman; a weekly lifestyle magazine; and a monthly magazine and various supplements.

It might come as a surprise that Times of Oman is far from the only English-language daily in the relatively small (population 3.6 million in 2013, according to the World Bank) country. In fact, there are four! The other three include a government-owned paper that obviously has fewer budget restrictions than the Times does – but fewer readers as well. All told, it is a “highly competitive” market, says Armstrong. The readership consists of expatriates from south Asia, the UK and USA, and well-educated Omanis. Armstrong proudly says 25 percent of the website’s audience consists of Omanis, up from 10 percent not long ago.

The staff of the paper and website is, in Armstrong’s words, “tiny… nine and a half reporters,” two section editors, and 15 production staff members.

“Everybody’s digital now. There are no print-only jobs anywhere in the newspaper. When you’ve got few resources, it’s the only way to do it,” Armstrong says.

All the reporters are non-native English speakers, and most of them lack formal journalistic training. When Armstrong arrived in early 2014, “The paper wasn’t relevant to its readership… We worked hard to try and start telling the story of Oman… If you look at the standard of the copy, the standard of the journalism and the content in the paper now, it’s vastly better than when I took over. But we’re not the Guardian, we’re not the New York Times yet.” The staff is “trying hard, and I think that’s why we’ve done relatively well in the digital space…I think we try harder than anyone else in Oman,” he said.

One area where no real effort has been required, other than unleashing existing talent, is layout. Said Armstrong, “We have a great creative department that is doing some really interesting full-page features, beautifully designed. I’ve got an amazing creative director… When I took over the newspaper, this guy had been just in the lifestyle section, in the back of the newspaper, doing these amazing features.

“The first thing I did was to get him onto the front page, get him into the general news section. I said, ‘All these beautiful things you’re doing, start looking at digital…’

“If there was ever proof of the old management adage, ‘Find someone who’s better than you and just get out of their way,’ that’s it.”

One result of that approach was unveiled in Vienna during this year’s World Publishing Expo, as the Times received a World Digital Media Award in the Best Data Visualisation Project category for its multimedia presentation “Oman’s National Dress.”

WAN-IFRA is compiling a report that will describe in detail how the WDMA-winning projects, including the Times’s, came about. Watch our website for details.