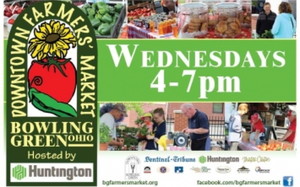 Republished from Metro Creative Services and the Sentinel-Tribune by permission.

Upon hearing that two of Bowling Green‘s longstanding events — the weekly farmers market and annual vintage car show — were in danger of being eliminated due to the absence of oversight and marketing support, he sprang into action. By the end of the meeting, Dishmon had not only offered the newspaper’s marketing resources, but proposed that the Sentinel-Tribune take over the operation and oversight of the events. Today, the farmers market and car show are thriving and both the community and the newspaper have profited from the arrangement.

The secret to the success of this venture, says Dishmon, lies in leveraging the newspaper’s resources to promote and expand the two events.

Banks Dishmon“For example, every Tuesday, we run ‘Cook’s Corner,’ where we feature a local individual and one of his or her recipes,” Dishmon says. “To promote the farmers market, we now feature a different vendor each week along with the featured cook both in print and online. The farmers market also has its own Facebook page, so we’ve been able to create a social media following for the market both through the paper and on its own.”

The Sentinel-Tribune has integrated the farmers market into its promotional activities in two other ways. First, Dishmon arranged for a local tavern/restaurant to sponsor live music at each farmers market. The musicians, who are scheduled to perform at the tavern that evening, appear during the first hour of each market. The performance is great entertainment for market visitors and drives business to the tavern, which is also promoted on the farmers market Facebook page.

Second, the newspaper sponsors a farmers market frequent buyers program that drives traffic to downtown businesses. Each farmers market vendor offers its own frequent buyer card and gives customers one stamp for each US $5 they spend at that stall. When the card is full, shoppers exchange the card for $5 in Bowling Green (BG) Bucks, which can be used at any business that belongs to the town’s Downtown Business Association.

“With this program, there is an incentive for vendors to upsell in order for farmers market customers to receive additional stamps and, at the same time, we’re driving business to our downtown merchants,” says Dishmon. “This has been a big hit with shoppers and with our downtown business owners. The BG Bucks enable the downtown business owners to see how much money the newspaper is putting back into the retail sector and why the newspaper is such a positive force in the community. This is just one of the ways that we’ve been able to enhance our credibility in the community through these events.”

The Sentinel-Tribune’s adoption of Bowling Green’s annual vintage car show, which celebrated its 15th anniversary in 2016, further enhanced the newspaper’s credibility. This year, with the help of 90 volunteers, Dishmon and his team welcomed 369 cars — and car owners — and more than 2,500 spectators to the weekend event. Despite working on an extremely tight schedule, Dishmon says that the show went off without a hitch and was a huge success on all fronts.

“We have relationships with our big box stores, so we were able to get them involved in the event,” Dishmon said. “Our car dealers, a major grocery chain and a bank were the major sponsors and we leveraged all of our marketing and social media resources to connect with area car clubs and promote the event. Next year, we’re going to expand the show to include motorcycles as well, so that will add a whole new element.”

For Bowling Green’s Sentinel-Tribune, investing in the farmers market and car show has paid off handsomely. In addition to producing in-paper features and special sections devoted to the events, the payoff includes heightened admiration for the newspaper and the potential for developing new and profitable relationships throughout town.

“There’s a whole new respect for the newspaper because people now see us as a major player in the life of the community,” Dishmon says.

(Editor’s note: The WAN-IFRA Report “Alternative Revenue Streams for Publishers” contains a section about events, with four case studies: Texas Tribune, FT Live, Grupo Nación, and Le Télégramme de Brest. The report is available free of charge to WAN-IFRA members and can be purchased by non-members. More information can be found here.)