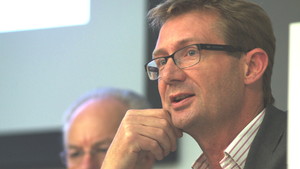 Mobile phone alerts literally meet users wherever they are, but to date there has been little research into how they are perceived and what the industry can do to make them more effective. [Editor’s note: By coincidence, Peter Marsh recently contributed a guest post describing the results of a proprietary study.]

A report entitled “News Alerts and the Battle for the Lockscreen” by Nic Newman (in photo), a founding member of the BBC News Website and a Research Associate at the Reuters Institute for the Study of Journalism, describes how publishers and brands can attract attention and build user habits via news alerts.

The report contains the results of surveys of 7,577 adult smartphone users in the UK, USA, Germany and Taiwan. The surveys were conducted by YouGov between 26 September and 10 October 2016.

Here are five takeaways from the report:

1. News alerts are popular, but publishers have a large, untapped audience.

To put things into perspective, the study shows that almost two-fifths of smartphone users in Taiwan (39%) receive news alerts, as do one-third of Americans (33%) and about a quarter of users in both the UK (27%) and Germany (24%).

More than two-thirds of those receiving news alerts (72%) value the notifications and consider them crucial.

Nonetheless, the report reveals a major pitfall: Of all app users, only about half are receiving alerts. It’s imperative, and probably easier, to get brand loyalists on board with alerts since they’ve already demonstrated enough interest in the content to download the app.

Just under four in ten (38%) of those not getting news alerts say they have ‘no interest’ in taking them in the future. But, notably, about a third (31%) of that group said they might take interest if personally relevant alerts could be sent. An even larger group (36%) said they might use them if they could control how many and how often alerts showed up.

One way to get people on board is by developing strategies to target specific users.

“Carefully targeted alerts may be able to bring audiences back more regularly, and help build a deeper relationship with loyal users that may eventually translate into advertising or subscription revenue,” the report says.

3. Breaking news is king, as are broadcasters.

People value breaking news in alerts; 66% found that to be the most important type of news alert. The illustration shows why:

Broadcasters in three out of the four countries are the most engaging when it comes to news alerts, with 63% of people using news alerts in the UK choosing BBC News. In the US, CNN and Fox are at the top, and in Germany, n-tv is the top performer. Taiwan is the outlier with Yahoo News at the top spot, “partly because TV brands were slow to get online, ceding breaking news to Yahoo,” the report reads.

Fortunately, almost three-quarters of users (73%) are happy with the number of alerts they receive. Almost as many (72%) believe that notifications from news organizations represent a critical backbone of their journalistic mission.

However, the report cautions that consumer backlash could result if publishers and advertisers opt to increase the numbers of alerts in the future.

Nearly one-quarter of smartphone users (23%) have uninstalled an app because of a surfeit of alerts, but many of those apps are for gaming or shopping rather than news.

It boils down to the fact that people want to control what comes directly to them, or at least have a say in what is relevant.

“In this regard, publishers should focus as a matter of urgency on improving the relevance of their alerts through a combination of passive personalisation and more transparent and explicit controls,” the report says.

5. Be innovative, experimental, and open to emerging formats.

“Insights from our research suggest that smartphone users often want more than a headline but less than a full article,” the report says.

Rich-media notifications satisfy that desire by allowing users to engage with content without having to read an entire article – or even leave the lock screen at all:

The report also advises publishers to keep abreast of new technology such as the Apple Watch.