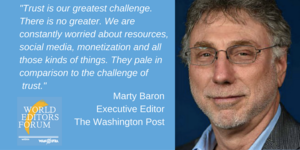 NiemanLab’s predictions for 2017 are a good place to start thinking about what lies ahead for journalism. There, Matt Waite puts us in our place straight away by telling us that the people running the media are the problem.

Gabriel Snider is a little kinder to the purists among us: high-quality, high-cost, high-impact journalism is not just a commercial product in search of a business model, but a cultural form worthy of support and protection. Hooray! The good news is the support seems to be there, at least in the US, where the top news brands reported a significant uptick in subscriptions after the Trump election.

Trump, fake news and Facebook are the enduring themes of 2016. Fitting then that in the closing days of this year we have action from Facebook to stem fake news. Paid work for the global network of Poynter affiliated fact checkers? Maybe not.

Depressing is the prediction by Matthew Ingram that the Faustian dance with Facebook will continue in 2017. For the sake of Facebook’s reach and advertising pennies, news publishers are feeding content to the gorilla that is Facebook. “What they are giving up in return may not be their souls, but it’s close enough,” Ingram warns.

Tired of talking about Facebook? American Press Institute’s Jane Elizabeth shifts the conversation, telling us what journalism needs to do to fight misinformation and fake news. Meanwhile Margaret Sullivan, writing in the Washington Post warns that in fixing “sickening” fake news, we should not make the cure worse than the disease.

Much of Facebook’s seduction has been the sheer numbers it reaches. The FT’s Renee Kaplan warns that going for pure reach, without return, may no longer be affordable.

For journalists, 2017 brings a particular challenge in framing emphasis, scepticism and tone, writes Guardian US editor Lee Glendinning. This calls for “highly focused editing, which is unafraid, exacting, details-driven and intelligent”.

Among the techie predictions that NiemanLab highlights, the theme that I keep hearing, is that the 2017 revolution is about voice. The kind of streamed voice that draws together news, artificial intelligence and mobile. Think of news on Amazon echo, Siri and Google Home. But also newsy podcasts.

Whatever is thrown at us in 2017, we must resist the urge to over-correct, warns Vivienne Schiller.

Soothsayer of the year award is shared by Tow Centre’s, Emily Bell and Marty Baron, Executive Editor of the Washington Post.

Bell foresaw many of 2016’s problems when she warned in March that Facebook is eating the world. She ends the year with a cautionary message in the Columbia Journalism Review on the tech/ editorial culture clash: “It was once the case that more technology-focused resources potentially meant fewer reporters in the newsroom. That choice can now be seen for what it always was: a false bargain. As reporting and technology converge, it is not a matter of journalists learning code, but of journalism becoming code.”