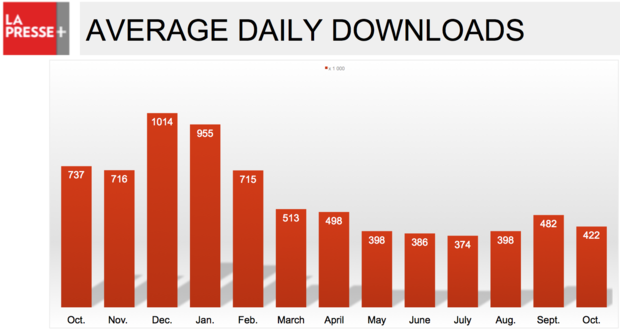 Today, the print edition is discontinued on weekdays and maintained only on Saturday. The app La Presse+ reaches 260,000 unique tablets every day, with a peak at 300,000 the day after the American elections.

Crevier explained that discussions of a change in business model started back in 2010, under the pressure of shrinking readership and decreasing advertising revenues.

Seamless transfer
La Presse found in the tablet the technology that would allow a seamless transfer of the work of the 250-journalist newsroom into the digital world, without losses in terms of quality.

“We have always been convinced,” said Crevier, “that the best way for us to differentiate ourselves (from the Facebooks and Googles of this world) is continuing to produce high quality contents and to sustain a large newsroom.”

He added that in his opinion the tablet is the only digital device available at the moment that enables the best possible storytelling, while ensuring the revenues necessary to sustain quality journalism.

La Presse paper edition used to reach 46% of readers aged between 24 and 54, the most attractive audience for advertisers. La Presse+ managed to “over index” the Quebec population in this age group (52%), Crevier said, rising to an astonishing 63%. The time spent on the app is 40 minutes on average on weekdays, with 52 minutes on Saturdays and 50 on Sundays.

Regarding advertising “the readers are always in full control of their experience: there are no pop-ups, no pre-roll, no intrusive items” said Crevier.

Nevertheless, the remarkable level of engagement enables La Presse+ to maintain a CPM at the unprecedented level of $ 51 – in print it was $ 37.

In a market where competitors face steady revenue decline, La Presse finds itself in a growing business, both in terms of readership and advertising.