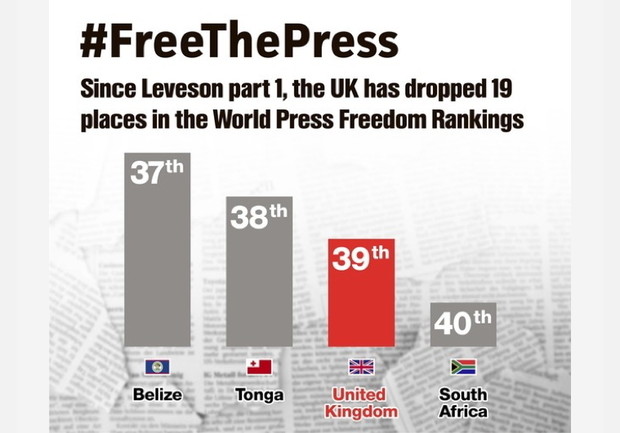 It is not the first time that we are forced to turn our watchdog eye to Britain.

In January 2014 “a year of unprecedented focus on press freedom issues in a developed democracy” culminated in the WAN-IFRA mission to explore whether “press freedom has indeed been dealt a blow in the United Kingdom”. Three years later the UK Government is considering invoking Section 40 of the Crime and Courts Act 2013, and raising even more concerns for the future of the press in the country.

What the activation of Section 40 would mean is that a newspaper that has elected not to join the state-approved press regulator, and that a court of law has found to have been wrongly accused, is nevertheless forced to bear potentially crippling legal costs (including those of the defeated plaintiff), with obvious implications regarding self-censorship and the sheer sustainability of freedom of speech.

At WAN-IFRA, we strongly believe that such a rule would be in breach of Article 10 of the European Convention on Human Rights, that Section 40 of the Crime and Courts Act 2013 should be repealed and the Leveson Inquiry discontinued.

We also reiterate the warning to the British authorities from our press freedom delegation that visited the UK in January 2014, that such rules translate to an attempt to control public debate and, if passed in a country that is supposedly a bastion of free speech, will set a dangerous precedent for media freedoms in other, less democratically established parts of the world. We fully expect that the new regime will lead to a multiplicity of risk-free, false claims that will have chilling consequences on the freedom of the press as well as a debilitating effect on the financial independence of media companies.

If passed in a country that is supposedly a bastion of free speech, the proposed rule will set a dangerous precedent for media freedoms in other, less democratically established parts of the world.

Background:
Following the phone hacking scandal of 2011 the UK Government launched a public inquiry into press ethics chaired by the then Lord Justice Leveson. Part 1 of the inquiry was concluded in November 2012 with the publication of 92 recommendations mainly calling for a new system of press regulation. The new system was imposed in the controversial form of a Royal Charter in October 2013. The Royal Charter also created the Press Recognition Panel, an independent body before which a press self-regulator could apply to become “recognised regulator”.

The self-regulator IPSO  (Independent Press Standards Organisation) was created in March 2014. It counts more than 2,500 member titles but never presented an application before the Press Recognition Panel to become “recognised regulator”. New self-regulator Independent Monitor for the Press (IMPRESS) instead sought and obtained recognition from the Panel on 25 October 2016. The News Media Association recently challenged the legality of the Press Recognition Panel’s decision to recognise IMPRESS.

Until early next year the British people are able to express their opinion on whether Part 2 of the Leveson inquiry should be carried out, and if Section 40 should come into force. To say no to these measures, visit #FreethePress