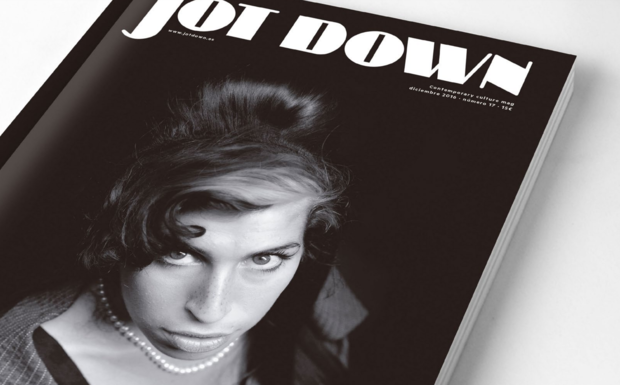 The magazine began as an idea a Spanish group of friends had back in 2011. They weren’t journalists, but they wanted to create a magazine with the kinds of pop cultural content that they liked to read, but written and presented in a way they felt was missing from other Spanish publications.

Jot Down magazine made its online debut on 16 May 2011. Twelve months later, they had reached an audience of 500,000 unique visitors, and they launched a print version.

Today, the website has 1 million unique visitors. And on the print side, they regularly sell between 10,000 and 15,000 copies of the magazine, which is published quarterly.

In addition, they have created an offshoot publication called Jot Down Smart, which is a Sunday magazine that Jot Down produces for El País, one of the Spain’s largest and best-known newspapers, which thanks to Jot Down Smart, also helps El País sell an additional 5,000 newspapers on Sundays.

In this interview, Ángel Fernández Recuero, the founder and CEO of Jot Down magazine, tells WAN-IFRA’s Angela Pontes Rodriguez about the reasons for their success and the magazine’s continuing growth.

WAN-IFRA: What was your business model when Jot Down began in 2011, and how has it evolved?

The project was born with a goal of reaching 300,000 unique users in our first year, and once we achieved that number, we would publish the print magazine.

As you can see, we did it, and we even went beyond our prospects: instead of 300,000 unique visitors reading the online version of Jot Down magazine in 2011, there were 500,000. This was the starting point of Jot Down as a business.

How do you explain your success compared to what other media are doing?

Our content makes the difference. We are very rigorous, but at the same time, our content is entertaining. We cover culture in a pop-art style. There are stories that may not be interesting for some readers at all, but we make them interesting to engage the audience.

For example, with a subject like ‘epidemiology,’ how do you draw the attention of the reader? We found out that the man who is considered one of the fathers of it was named John Snow, so we started the article writing about Game of Thrones. [Editor’s note: The highly popular television series has a central character with the same name, but who spells John without the “h.”]

We don’t limit the texts. We don’t follow any written rules of some internet guru. We write our stories in the same way that we would like to read them. That’s it, and it works. We’ve seen that is what people want and like.

What are the demographics for your digital offering and do they differ from the print audience?

Our audience is mostly the same. There is an important conversion rate. The more readers we have for our digital magazine, the more people will buy our products.

We are the first online-only cultural magazine in Spain, and our print version is over any magazine in the country, and we are talking about a publication that costs 15 euros. We create visibility through our online magazine.

What role does the print magazine play in the model? And why not publish more frequently since it is successful?

The print version of Jot Down magazine is our jewel in the crown, and why? Because there are 300 pages in black and white without any kind of advertisement [only the back cover, which has a full page ad ].

From our own perspective, it is better to have only one magazine for 15 euros every three months rather than selling three magazines for five euros, not only in terms of costs but also for the readers, to keep them from getting bored.

However, we have other magazines, too, a monthly one: Jot Down Smart. We created it for El País (Grupo Prisa). It is another type of publication, a magazine produced with stories from our archive, with a monthly circulation of 20,000 copies.

What are your revenue pillars (digital subscriptions, advertising, branded content)? How is each developing, and what are your possibilities for leveraging growth?

We have changed over the years. Until our agreement with El País in 2015, 70 percent of our revenue came from the sale of our products and 30 percent from advertising [in addition to the back cover, there is a single banner ad on Jot Down’s website].

Regarding ads, our model is far away from what the current market is offering. We go straight to the clients and look for those where we can bring them added value.

After the agreement with El País, half of our income comes from it [the agreement]: We create Jot Down Smart for them and charge them for it.

In 2016, Jot Down had a turnover of a million euros, that comes from the print side, but [that is] thanks to the digital website from where we attract the audience and create our brand.

Digital subscriptions are often a nightmare for many publishers, do you have a specific model in this area? If so what are you targets and should readers revenue play an important role in the total income?

No, we don’t have digital subscriptions, and we are not going to have them. We are not defined from right, centre or left parties, and not even influenced by the readers. We create what we want and give it to them. The hook: our content, what people want to read.

Our success is based on our readers’ loyalty for five years now. They are our fans and follow Jot Down through social media. If you like what you read on the website, you will like the print version even more.

We are seeing a big phenomenon that is going on. People take pictures of themselves, while drinking a coffee, sitting on a terrace, at home … reading Jot Down magazine and post them on Twitter. Jot Down is very trendy.

Do you view Facebook, Snapchat and other social media platforms as friends or enemies?

Snapchat is barely used in Spain. Facebook is a two-edged-sword, ‘bread for today, but be hungry tomorrow.’

So Jot Down doesn’t depend on either Facebook or Google.